Bookish Thoughts from Anjin: Mage, Book One: The Hero Discovered, Volume One by Matt Wagner

Please join me in welcoming my husband, Anjin from Anjin Unleashed, to Musings of a Bookish Kitty! After a little--okay, so maybe a lot of--arm twisting, I finally was able to talk him into writing a guest review for my blog. 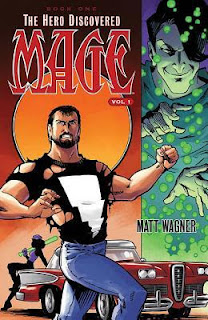 Do you ever wonder what urban fantasy was like before it got cool? Then I have the graphic novel for you.

Originally published during the rise of independent comic publishing in the 1980s, Mage: The Hero Discovered was Matt Wagner's second attempt to launch a series after his first series, Grendel, faltered. Based loosely on the Arthurian legend with a lead character who looks suspiciously like Wagner himself, Mage was unlike anything a kid into Spider-Man comics had ever seen before. Instead of superheroes in tights, this comic portrayed a world of fantasy overlayed on an urban environment. It was a revelation to me.

Mage is the story of Kevin Matchstick, a man dissatisfied with the path his life has taken. Finding himself without friends, family, or lovers, Kevin has shut himself off from the world. But after a chance encounter with Mirth, a modern day Merlin, his uneventful life spins out of control. Suddenly under attack from ogres, red caps, and other minions of the baleful Umbra Sprite, Kevin must accept his destiny before the forces of darkness overwhelm him and his new companions.

This edition is based on the remastered comics produced by Image in the late 90s. All of the pages were recolored in the digital style. This greatly benefited the early, rougher issues, but reduced some of the warmth and charm of the later issues. As well, a few errors crept into the text that still have not been corrected for this issue. I can't tell you to go back and collect all the original issue just to see what I mean (that took me several years to accomplish myself), so I'd rather have this not-exactly-ideal version than none at all.

Somehow when I started reading, I was unaware that Mage, Book One: The Hero Discovered, Volume One contains only the first half the series, leaving off on a weirdly unsatisfying cliffhanger. I can't imagine reading this volume without having the second available. Nonetheless, Mage is one of my favorite series and I'm glad to see it return for more people to experience.