Life is forever changed without her; without the sense of her somewhere near. ~ Opening of The Last Time in Paris 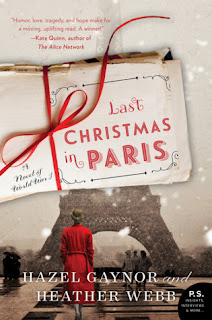 It may be surprising to learn I do not often read epistolary novels despite my long standing history in letter writing. It wasn’t that, however, that drew me to The Last Christmas in Paris. It had more to do with the World War I setting and the description of the novel about two young people, one a soldier on the front lines and another, a woman wanting desperately to do her part in the war as well. Hazel Gaynor and Heather Webb joined forces to tell their story, doing so through letters.

World War I was supposed to be the war that ended all wars. At the start of the war, spirits were high, and it was believed the end to the fighting was in sight. Thomas Harding, an aspiring college professor, his best friend, Will Elliott and Will’s sister Evelyn believed it too. It was with anticipation, a dash of sadness, and a lot of hope that the two young men went off to war, expecting to be home by Christmas of that same year.

A much older Tom looks back on his life at the start of the novel, revisiting the war through letters he and Evie exchanged over the years, along with a smattering of letters from others as well, including Evie’s best friend Alice and Evie’s brother, Will. The reader is taken along the journey with him, and it is through those letters, the reader gets to know each of the characters, their lives, fears and dreams, as well as experience the horrors of war and how it irrevocably changed them.

At the heart of The Last Christmas in Paris is a love story, one that evolves slowly but undeniably over the course of the letters. Evie and Tom reminisce about their childhood pranks and the fun they had, while at the same time sharing their fears and the dire state of affairs both at home and on the war front. Tom longs to be home, the war a constant reminder of how fragile life is. Evie, on the other hand, longs to be in the thick of it, wanting to see for herself and help out as much as she can. A lady of society, her mother expects her to find comfort in knitting socks and gloves for the soldiers, but Evie wants to do more. Against her mother’s wishes, she volunteers to deliver mail, but even so, she is not completely satisfied.

Tom has worries at home himself—his ailing father and a foundering newspaper business with no way to help either. Despite his reservations, he reaches out to an estranged relative for help, which only leads to more problems. The government is coming down hard on the media, demanding they feed their audiences propaganda of a more positive variety instead of focusing on the realities of war.

It took me a moment to get into the flow of the narrative, although the opening section took my breath away. I soon was lost in the letters, wanting to know more and having a hard time not reading “just one more letter” when I had to set the book down.

I fell in love with Tom and Evie. Tom and his love for literature, his support of Evie’s writing and in  being her own person, his protectiveness, and honesty. I admired Evie’s longing for the truth, her will and drive, as well as both hers and Tom’s hearts. I hated to see the letters end, wanting to read more, to be a part of their lives for just a little longer.

Through the letters, the reader gets a sense of the war. The initial optimism to the reality of the damage and heartache the war brings with it—along with the exhaustion, dwindling faith in the cause, and the desperation and pain. There is a definite shift in the characters’ attitudes over the course of the novel. Evie comes to it later than the others, in part because she does not see it firsthand initially.

I enjoyed the historical tidbits, some I know better than others: the Women's Army Auxiliary Corps (WAAC) which assigned women to nonessential roles generally reserved for men in order to free the men to fight; the Order of the Feather, an organization of mainly women whose mission was to shame men at home who were not fighting in the war; the devastation caused at some of the worst battles during the war; and the treatment and stigma of those suffering from a war neuroses, what today we think of as combat fatigue or Post Traumatic Stress Disorder. It is good, especially, to see attention paid to this last given how prevalent it is today. It brings home that this is not a new problem or occurrence.

Reading a novel written in letters creates an intimacy with the characters that one might not get otherwise, but it also limits the view of what is going on outside the letters. Both Gaynor and Webb do a great job of compensating for this overall. I was thoroughly wrapped up Tom and Evie’s story. Events speed up quickly towards the end, almost too quickly, but, emotionally, this book was a real hit with me. By the end, tears were streaming down my face, and I did not want to say goodbye to the characters.

I hope you will check out what others had to say about Last Christmas in Paris on the TLC Book Tours route!