From the Archives: The Falls by Joyce Carol Oates

I began keeping a reading journal several years before I began blogging. I find it interesting to sift through my thoughts of books that I read back then. My reviews were often brief and contained little substance, but I thought it'd be fun to document them here on my blog as well as share them with you. Here is one from December of 2005: 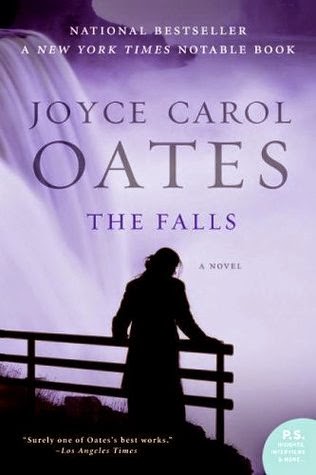 The novel, The Falls, opens with the suicide of a man on his honeymoon. This is the story of his bride, Ariah, and the life she leads after his death, her new family, their struggles, and their achievements.

I was a little put off in the first 180 or so pages of the book, wondering if I should set it aside and move onto something more interesting; however, because I was reading the book for as a group read, I plodded along. I had a difficult time getting through the portions of the book devoted to Ariah and her thoughts. I did not care for her as a character through much of the book, I’m afraid. I felt some sympathy for all she had been through; however, her personality and quirks left me feeling irritated with her more than anything.

By page 186, the book took an interesting turn and from that point on, I was lost in the pages, barely putting the book down until the very end. I was especially drawn to the story of the infamous Love Canal, which was only beginning to make headlines at the time period in which the book was set, and what was to follow after in the novel.

Dirk Burnaby’s character was interesting, and I especially was drawn to his children and their stories about their search to know more about the man their father had been and to find out more about themselves. They were each very different and dealt with their childhood and early adulthood in their own ways.

The author’s descriptions of Niagara Falls brought back memories of my trip to that part of the country several years ago, and I could almost picture myself there again. It would have been a mistake to set this book aside after the first 50 pages as so many fellow book readers advise. I would have missed out on a wonderful story that will stay with me for a long time to come.