Exactly twelve minutes into cheerleading practice, and I already wish I were dead. ~ Opening of Hexed 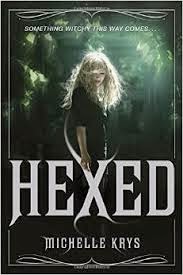 If high school is all about social status, Indigo Blackwood has it made. Sure, her quirky mom owns an occult shop, and a nerd just won’t stop trying to be her friend, but Indie is a popular cheerleader with a football-star boyfriend and a social circle powerful enough to ruin everyone at school. Who wouldn’t want to be her?

Then a guy dies right before her eyes. And the dusty old family Bible her mom is freakishly possessive of is stolen. But it’s when a frustratingly sexy stranger named Bishop enters Indie’s world that she learns her destiny involves a lot more than pom-poms and parties. If she doesn’t get the Bible back, every witch on the planet will die. And that’s seriously bad news for Indie, because according to Bishop, she’s a witch too.

Suddenly forced into a centuries-old war between witches and sorcerers, Indie’s about to uncover the many dark truths about her life—and a future unlike any she ever imagined on top of the cheer pyramid.

So. The opening paragraph of the publisher's blurb turned me off immediately.  Based on the description of Indigo Blackwood, our heroine, alone, I already did not like her.  Not a good start for a book.  But, well, witches. I do like stories about witches. Why not give it a try?  I crossed my fingers as I began reading that this would be a light and entertaining book to read.

Fortunately for both of us, Indigo and I made our peace quickly and I enjoyed reading Hexed. It was fun and at times quite intense, especially towards the end.  Indigo, or Indie as her friends call her, narrates the story and I came to really like her snarky attitude and sensitive nature.  She grows over the course of the book and is someone I wouldn't have minded hanging out with in the end.

My favorite characters, however, have to be Paige and Bishop, both of whom  proved to be handy in tight situations.  I especially liked how strong a character Paige was.  She came across as a little desperate in the beginning--if you are to believe Indigo--but she's actually got a good head on her shoulders, which includes some self-respect.  Bishop is all mystery at first, but the more of his character that is revealed, he proves he is a force to be reckoned with.

I liked the world the author has created, the mythology around her witches, including how and when they come into their powers.  There are two opposing magical forces in Hexed, the witches who are good, and the sorcerers who are bad.  The differences between them is slight, but evidently the two groups do not like each other.  The sorcerers covet the power and want to destroy the witches once and for all.

The bad guys in the novel were more caricatures than anything else, which was both good and bad.  It fit with the overall story's style--a balance of dark and comedy--but it also took away from my enjoyment a bit.  It was hard to take them seriously as a threat at times.

While the mystery in this story comes to an end, the story isn't quite over.  There is a cliff hanger at the end of the novel.  And based on the epilogue, I am guessing the next book in the series will focus on another of the characters.  As entertaining as Hexed was, I am looking forward to seeing what Michelle Krys comes up with next.  It's always nice to be proven wrong, and I am glad I did not let the synopsis of the book put me off it completely.  Hexed was an enjoyable book--just what I was hoping for: a mystery, humor, suspense, romance, and a lot of magic.

You can learn more about Michelle Krys and her books on the author's website.