Junior Lara saw the doves and knew something was wrong. ~ Opening of The Night Visitor 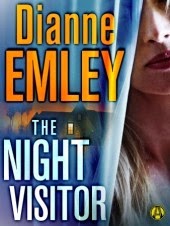 Gorgeous and successful, Rory Langtry seemed to have it all. Daughter of a movie star and sister of a supermodel, Rory was engaged to sexy artist, Junior Lara. But her bright future went dark one terrible, bloody night that left her sister dead and the accused murderer—Junior—in an extended coma.

Now, five years later, Rory appears to have put the past behind her. She has a wonderful new fiancé and heads a successful cosmetics company. Yet dark secrets threaten. Across town, Junior lies close to death but before he departs he seeks to clear his name.

Sometimes a book is just not a good fit for the reader. I enjoy a good paranormal mystery and was looking forward to reading The Night Visitor since I first heard about it.  It sounded different--and it was.  It sounded suspenseful--and it was.  Some of you may like this one, and I hope you do.  It just wasn't for me.

What I did not like: The novel is told in third person, each chapter alternating between characters so the reader gets an overall view of everything that is going on for all the major (and some of the minor) characters involved.  While this can be great, I found it created a distance between the characters and me.  I never really connected with any of the characters nor did I feel like I got to really know them.  I felt like I was watching a day time soap opera the entire time I was reading the novel.  I wanted to like the main protagonist, Rory, but I never quite did.  Not completely, anyway.  As a result, I was not quite as invested in the story or the characters as I wanted to be.

I had other issues with the book: a too predictable plot line in terms of the mystery, which I had figured out almost from the start, and the lack of attention given to a particular character/relationship in the end.  It's minor really (the author did a good job tying up most of the loose ends), but to say more would spoil the end of the book. Unfortunately, as minor as it is, it was enough to hurt my enjoyment of the book in the long run.  I imagine both of these issues could be more me than the book given what I do for a living (and if that's the case, it's a credit to the author for her accuracy in getting so many of the markers right).  I say this because it seems like most others who have read and loved the book were taken by complete surprise and didn't seem to mind the issue I had with the ending.

What I did like: While I thought the story thread in the beginning with Danny was a bit over the top and confusing (you will have to read the book to know what I mean), I thought the author did a good job in building on the possession story line.  Possession is probably not the right word, but that's kind of how I interpreted Junior Lara's "visits" to Rory. The possession came on slowly and became all consuming as time went on. Emley's depiction of those moments, how they impacted Rory, and the reactions of those around Rory were extremely believable.

I found Anya's character the most interesting in the novel, and perhaps the most well developed of all the characters.  Then there was Tom, Rory's current fiance, who was such a nice guy.  It was impossible not to like him.

While overall I was disappointed with The Night Visitor, I liked it enough to finish reading the book. It was compelling at times and quite suspenseful. The book has gotten a number of positive reviews, and high praise from other book bloggers.  This was just a case of the book and the reader not being a good fit for each other.  Please check out the other reviews on the tour.

To learn more about Dianne Emley and her books, please visit the author's website.

I hope you will check out what others had to say about The Night Visitor on the TLC Book Tours route!