Bookish Thoughts: A Matter of Mercy by Lynne Hugo

The dune fence between their house and the beach still tilted toward the water. ~ Opening of A Matter of Mercy 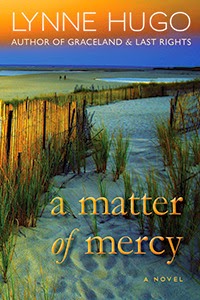 Caroline Marcum thought she’d escaped the great mistake of her life by leaving Wellfleet harbor, but is forced to face it when she returns, reluctantly, to care for her dying mother. Ridley Neal put his past-and his prison term-behind him to return home to take over his father’s oyster and clam beds. Casual acquaintances long ago, when a nor’easter hits the coast, Rid and Caroline’s lives intersect once again. When Rid and two other sea farmers are sued by the wealthy owners of vacation homes who want to shut them down, and Caroline accidentally meets the person she most wronged, they each must learn to trust-and love. Inspired by a 1996 lawsuit, A Matter of Mercy is a riveting novel about treasuring the traditional way of life in the shallows of beautiful Cape Cod bay by discovering where forgiveness ends. And where it begins.

A Matter of Mercy appealed to me on several levels, including the fact that it is based on an actual lawsuit in which local aquaculturists were sued by wealthy homeowners over the land they farmed. I knew nothing about aquaculture or the lawsuit before reading this book, but I was curious, nonetheless. I have a soft spot in my heart for the underdog, and it seemed to me that the aquaculturists were just that. I was also drawn to this book because of Caroline Marcum and her troubles.  I enjoy books about redemption, especially when it comes to finding a way to forgive oneself.

Lynne Hugo has written a multi-layered novel full of complexity. I was instantly drawn into Caroline's story as she cares for her dying mother. It isn't easy to say goodbye, especially to the person who you feel you most need in the world.

Years ago, Caroline made a horrific mistake that has continued to haunt her--and it rears up to slap her in the face one day when she visits the library. Caroline goes about looking for some sign that her mistake has been forgiven, but what it does is only bring up more grief for all parties involved.

Ridley and Caroline are drawn together because of a storm. For Caroline, life is already complicated. For Ridley, they are about to become so. Ridley has long since come to terms with his past, finding hope and a future in aquaculture. The lawsuit could take away everything Ridley loves and has worked hard for. He doesn't have time for a seemingly needy woman who just might be the enemy too--after all, she's one of the homeowners living on the beach too. Misunderstanding after misunderstanding ensue.  It isn't until Ridley discovers that Caroline's home is being vandalized and her life threatened that they are able to set aside their differences and really talk.

The characters are rough around the edges, and not without their faults. I loved that about them. Caroline and Ridley's relationship is a bumpy and awkward one.  I liked Ridley for his strong work ethic and loyalty to his friends.  I could really appreciate Caroline's desire to help and learn as much as she could about aquaculture. The other characters in the novel are also well developed, including Theresa who, as a mother, my heart ached for. In her shoes, I imagine I would have a hard time of it too, especially where Caroline is concerned.

The setting of the novel is such an important part of the book and the author really made Wellfleet and its surrounding towns in Massachusetts come to life.  I loved her descriptions of the area, including the weather the characters encountered. It brought the book even more alive for me.  It is obvious the author did her homework in learning about the aquaculturists and exactly what it is they do. I came to really care for their plight and hope they would come out on top.

A Matter of Mercy is full of emotion, both grief and angst. It is also a book about forgiveness and letting go. This is not a fast paced novel, but it is engrossing. I connected with the characters and their stories. I wanted so much for them to find peace and hope in the end. I am curious to know what else Lynne Hugo has written and will be reading more by her in the future.

To learn more about Lynne Hugo and her books, please visit the author's website.

I hope you will check out what others had to say about A Matter of Mercy on the TLC Book Tours route!