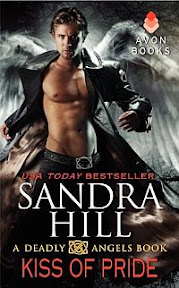 What to say about Kiss of Pride?  I was craving a little romance and so decided to give Sandra Hill's Deadly Angel series a try.  The idea of a vampire angel seemed a bit ridiculous to me, but if I can buy into other supernatural beings, why not a Vangel?

The author spends quite a bit of time at the beginning setting up the story, introducing the concept of a vampire angel--how seven Viking sons each committed one of the seven deadly sins and are given several hundreds of years of life to pay penance by saving the souls of those targeted by Satan's vampires, the Lucipires.  They travel through time, suck blood and get into their fair share of trouble, enough to earn more years of penance.

Kiss of Pride is the first book in the series, this one featuring, Vikar Sigurdsson, whose big sin was--you guessed it--pride.  He's a hunky all masculine Viking who has been assigned to prepare an old mansion for the Reckoning, a gathering of vampire angels.  Reporter Alex is assigned to interview the ever elusive Vikar, her boss wanting to get her away from the city as she waits for the men who murdered her husband and daughter to go on trial.  Alex's soul is at risk and Vikar must save her.  Only, Alex doesn't want to be saved.

And so the two meet in a Pennsylvania touristy little town called Transylvania, where even former Amish have gotten into the vampire spirit.  I think my favorite part of the entire book was the story about how the town, down on its luck due to the economy, was able to turn itself around by cashing in on the vampire craze.  Little does anyone know, however, they have real vampires in their mist.

Anyhow, Alex and Vikar are attracted to each other.  Both fight it.  Both end up in bed together.  They fight some more . . . You know how these things go. There's a little more to it than that, of course, but you get the idea.   It never got to the point of being tiring, however, something that can happen all too often in novels like this. Vikar is your alpha male type and Alex is your stubborn heroine type.  Both are beautiful, but neither perfect.  Vikar clearly still has issues with pride--he came across as cocky through most of the book--and I never really warmed up to him.  Alex  wasn't as fully developed a character as I might have liked, but I did like her.  She really struggled with the whole concept of vampire angels, much less the supernatural, which I appreciated.

After my initial disbelief, I kind of like the idea of a vampire angel, and even the explanation Sandra Hill's given as to why they exist (although, I can't stop giggling at the nickname "Vangel").   The execution, on the other hand, left something to be desired.  I reminded myself the book isn't meant to be taken too seriously.  It is a fantasy, after all.  Still, it was hard sometimes to tell what the book was trying to be--funny or serious or something in between?   I did eventually get into the story and just went with it, curious to see where the author would take me.

The novel is a bit more romance focused than I am used to--or like--but I knew that going in, so acknowledge the built in bias there.  I found the book to be okay and was disappointed overall.  I will be reading the second book in the series as part of a book tour, but if that book isn't better, I likely won't continue with the series.

You can learn more about Sandra Hill and her books on the author's website.