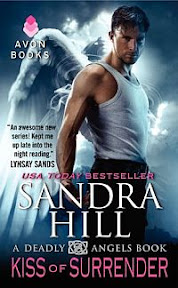 Kiss of Surrender by Sandra Hill

I was less than thrilled with the first book in Sandra Hill's Deadly Angels series but decided to give this second book a try anyway.  I was a little curious to see what the author could come up with next.  I mean, a Vampire Angel as a Navy SEAL?  This I had to read to believe.

Having read the first book in the series and knowing what to expect, I had a better time reading Kiss of Surrender. A book like this is meant to be pure fun and fantasy, and so I went in with no real expectations.

Trond is one of seven Viking brothers who committed one of the Deadly Sins.  Archangel Michael, with God's blessing, turns the Viking brothers into Vampire Angels as a means of punishment and to provide them with an opportunity to do penance for their sins.  It is their responsibility to save the souls of humans who are being targeted by Lucifer's Vampires.


Trond's most recent assignment is with the Navy SEALS.  If the devil wants a powerful army, what better place to search for new souls?  Trond and Karl, another although younger Vampire Angel, must find the souls at risk of being turned completely evil before it is too late.


Trond is a relatively likeable guy.  Trond is easy going and a bit of a jokester.  He's certainly creative--I mean, he's the one who thought up "near-sex" which he swore to his brothers in the first book, Kiss of Pride, was much less a sin than actual sex.  Trond's actual deadly sin, and the one he still struggles with, is sloth. He prefers to take the easy way out of most situations and the less energy he has to exert the better.  Clearly Archangel Michael has a sense of humor, assigning him to train with the Navy SEALS.

Given Trond's biggest flaw, is it any wonder the woman who catches his eye is the complete opposite?  Nicole Tasso is a WEAL, the female counterpart to a SEAL.  She is a self help guru, the penultimate planner, and always has something going on.  A former cop with a past she would rather forget, Nicole is all about the need to be in control.  Trond's attitude irks her no end.  Add to that the secret she is sure he is hiding that she just MUST uncover, and, well, you have a match made in heaven.  Sort of.

There are plenty of sparks between Nicole and Trond along with a lot of denial of feelings and resistance--but it's all to be expected in a book like this.  Trond tries to throw off Nicole by divulging a make believe secret about himself that is so unbelievable--it was hard for me to buy into Nicole, who supposedly is a smart woman, believing it--or even considering it might be truth.


My favorite part of the book had actually very little to do with the love story, but was rather a major side story.  Several times in the book, Trond comes up against a very powerful demon, Zeb, who is evil incarnate--or is he?  I liked the banter between Trond and Zeb and appreciated that Zeb was a more complex character than I expected.

I admit to a passing curiosity about a family of time traveling Vikings which were introduced in this book.  They had a very brief role, really, but it hints at another dimension to the books to be explored.  I can't help but wonder if there's a tie-in to the author's Highlander series.  I am not sure I'm curious enough to want to explore her earlier books though.


While I did enjoy this book more than the first in the series, I am still not sure how I feel about it overall.  There were too many moments when I was pulled out of the book by something or another that was said or that happened, my suspension of disbelief not strong enough to withstand it.  Just the term "Vangel" (Vampire Angel) was enough to set me off giggling.  I never grew to like Nicole much--I found her character rather annoying.  Still, I read right through to the end so that's saying something.  It certainly wasn't boring!  I think books like this will appeal to quite a few readers.  I'm just not sure I can be counted among them.

To learn more about Sandra Hill and her books, please visit the author's website.

I hope you will check out what others had to say about Kiss of Surrender on the TLC Book Tours route!

Many thanks to the TLC Book Tours for the opportunity to be a part of this book tour. E-copy of Kiss of Surrender provided by publisher.