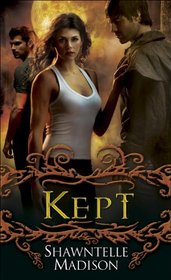 I don't know what is wrong with me.  I have started this review what seems like a million times, only to draw a blank.  What's sad is that I really liked the book and had such fun reading it.  There is plenty of action, a good lot of humor, eccentric characters who I just love, and steamy romance.  There is a car chase, a jealous girlfriend, fairies, and a steep competition with an obstacle course to boot.  What more could I ask for?

Fresh from defending her pack in battle, Natalya Stravinsky, a whip-smart werewolf with a lovable neurotic streak, wants a little rest and relaxation. Once an outcast, she's now eager to rejoin the ranks of her New Jersey pack, and has even gotten a handle on her obsessive urge to hoard holiday ornaments. Yet Nat barely has time to revel in her progress before the next crisis comes howling at her door.

Nat's father has suddenly gone missing, captured by the Russian werewolf mafia. And as Nat steps up to save her dad from a mob boss's deadly game, two men step in to play another round for her heart: her gorgeous alpha ex-boyfriend, Thorn, and her new flame, the sweetly sensitive wizard Nick. With her life growing more harried by the minute, Nat must stay cool, calm, and collected . . . or else risk losing everything.

I liked the first book in the series, Coveted, but I really liked Kept.  Shawntelle Madison takes it up a notch in the second book of her series featuring Natalya, a werewolf suffering from Obsessive Compulsive Disorder (OCD).

Natalya is such a likeable character--and easy to relate to. I appreciate that she's not like most urban fantasy heroines, which is such a refreshing change.  Natalya struggles with anxiety and OCD and is (mostly) working hard to overcome them.  Given what she's had to deal with though, I'd say she manages quite well!  It helps that she has found a great set of friends--from a surprising place, her therapy group.

I adore just about all of them.  There's the charming Nick, who I've developed a slight crush on, and Abby the Muse, who I hope will figure more prominently in future books because I want to know all her secrets!  Add in a succubus who struggles with relationships, a mermaid afraid of water--and for good reason!), and an insecure dwarf who has height issues.  And of course, there's Thorn, who is, as ever irresistible.  Reading about them all in action together just makes the book all the more compelling and entertaining.

There is quite a bit going on in the novel, from Nat seeking to fulfill her father's moon debt to her wanting to re-establish herself in her old pack.  It was almost like reading two different books about the same characters.  Still, I didn't mind.  I was sad when I finished the book.  Overall, this is such a fun series, and Kept was a great addition to it.