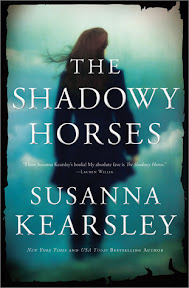 I had never read Susanna Kearsley before, but I suddenly began seeing her name everywhere. Reading her most recent novel, The Shadowy Horses, was like a breath of fresh air.  I easily lost myself in the story, set on the coast in Scotland, in a small fishing town called Eyemouth.   Kearsley is one of those authors that can bring a setting to life, making the reader feel as if she or he was actually there.  I WANTED to be there the more I read.

With its dark legends and passionate history, the windswept shores of Scotland are an archaeologist’s dream. Verity Grey is thrilled by the challenge of uncovering an ancient Roman campsite in a small village. But as soon as she arrives, she can sense danger in the air.

Her eccentric boss, Peter Quinnell, has spent his whole life searching for the resting place of the lost Ninth Roman Legion and is convinced he’s finally found it – not because of any scientific evidence, but because a local boy has ‘seen’ a Roman soldier walking in the fields, a ghostly sentinel who guards the bodies of his long-dead comrades.

Surprisingly, Verity believes in Peter, and the boy, and even in the Sentinel, who seems determined to become her own protector...but from what?

Described by some as a Gothic romance, this ghostly tale is definitely one of love and faith with an air of mystery about it.  I liked how simple the love story was, how naturally it came together over the course of the novel, woven around the mystery of the ghost and the eerie goings on at the archeological dig.

Verity Grey was easy to like and identify with.   She is smart and honest, thoughtful and adventurous.  She's certainly got her own opinions about things and is a skeptic at heart.  Still, she sees something in Peter Quinnell, the eccentric man behind the dig.  And I did too.  His charm was enough to convince me Verity should join his team to uncover an ancient Roman legion from the very first moment too.  His faith they would find what they sought, his trust in a boy with the second sight, never wavered--and I wanted, much like Verity, to believe him--to believe in him.

I enjoyed spending time with all of Kearsley's characters.  They were all unique in their own way.  I had my doubts about a couple, not quite warming to them, but others I fell in love with instantly--like David and his mother.  And, of course, Robbie, the young psychic.

The historical aspect of the novel was of particular interest to me and I found the details about the archaeological dig quite fascinating.  History has always appealed to me and it amazes me the things we can learn about the past thanks to archaeology   The town of Eyemouth itself has quite a history, some of it quite tragic.

Shadowy Horses was a joy to read, and I look forward to reading more by Susanna Kearsley in the future.


You can learn more about Susanna Kearsley and her books on the author's website.