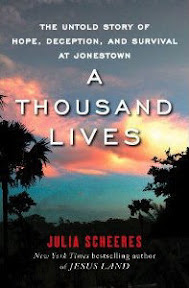 A Thousand Lives: The Untold Story of Hope, Deception and Survival at Jonestown by Julia Scheeres
Free Press, 2011
Nonfiction; 320 pgs

I wish now I had sat down to write my thoughts about Julia Scheeres' A Thousand Lives right after I completed the book. My mind was reeling as I read the book and there was so much I wanted to discuss about it. Alas, I decided I needed more time to think, and now, two books later, I am not sure what to say any more other than you have to read this book!

I had heard of Jim Jones as many of you have. I knew about Jonestown in Guyana. About the murder-suicides. I didn't know the details, however. I didn't know how Jones got his start, about how he dreamed as a child of being a pastor and how he wanted to bring whites and blacks together at a time when segregation and prejudice was running rampant. I could see how people were drawn to him. He was charismatic and full of passion. He was extremely personable. He took the time to get to know his congregants and reached out to them in times of need and doubt. He reached out to the underprivileged and gave them hope. He and his congregation did a lot of good for many people during those early years. At least that's the way it seemed on the surface.

It is unclear when Jim Jones' desire for power and adoration developed. Was it always there? Or was it something that grew over time, twisting into something ugly? I have no doubt Jim Jones was mentally ill, a condition exacerbated by drug use. I wanted to believe Jim Jones had started out with altruistic intentions, but given the amount of manipulation and lies, I have my doubts. The things he and those directly under him did . . . It's disgusting and appalling. I confess I am extremely skeptical of faith healings. I know about planting a supposedly sick person in the audience and then calling them up to have them miraculously healed. But reading about the lengths Jim Jones went to in order to create such an elaborate ruse, including drugging congregants without their knowledge and making them unwitting characters in his show made me sick.

In the beginning, the doors of his church stood open to all. As time wore on, however, those doors began to close. Jones reminded me of a domestic abuser. On one hand he could be extremely charming. On the other he was controlling and cruel. He moved his congregation from place to place, each time isolating his followers, getting them away from their families and friends. He made them completely dependent on him. He punished them just as he rewarded them.

His followers loved him initially. They would do anything for him. Jim Jones used that and twisted their faith and trust in him. The lie that was Jonestown, this supposed perfect socialist community, would become a grave for nearly one thousand people. Three hundred four of them were children, one hundred thirty one under the age of ten. The reality is that Jonestown was a living hell for most of the people there.

The sad thing is, this wasn't something that happened out of the blue. Jones had been building up to this for years. Many of the signs were there. He had such a grip on his followers, however, that many of them either didn't want to believe the worst or were too afraid or dependent on him to go against him. He made sure his followers knew to leave him meant certain ruin, possibly death. His threats were not idle.

I have said a lot about Jim Jones here, but the book really is about his followers. What is clear in the documentation and interviews with the survivors is that they believed in Jim Jones at one time only to be betrayed by him later. Scheeres does a good job of letting the reader into their hearts and minds, getting a better understanding of what his followers must have gone through. We never can truly know, of course. Even as horrible as it sounds on paper, I imagine the reality of it was even more terrifying.

A Thousand Lives is extremely well written and researched. I only wish we could have known more about what went on in the minds of Jones' top aides, those who participated in the deception and lies and eventual murder of so many people, including hundreds of children.

I haven't come close to expressing all of my thoughts about this book. I do think it's one worth reading and definitely is among my top reads of the year.

You can learn more about Julia Scheeres and her books on the author's website.