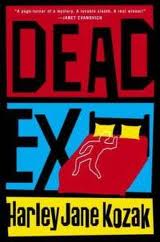 I read Harley Jane Kozak's Dead Ex (Doubleday, 2007; 352 pgs) and A Date You Can't Refuse (Broadway, 2009; 340 pgs) back to back. Wollie had gotten under my skin, and I didn't want to say goodbye until I'd run out of books to read about her. Wollie, in case you missed my two reviews of the first two books in the series, is a greeting card artist, only it seems she rarely gets a chance to do much of that as it doesn't bring in enough money. In past books, Wollie has earned money dating men for research and being on a reality dating television show. Dead Ex follows suit as Wollie finds herself back on the little screen, dating celebrities. Her boyfriend isn't too sure what to make of it, but Wollie has to make money somehow. And it's not like she's sleeping with the guys.
Wollie's best friend Joey seems to be at the brunt of suspicion when Joey's (and Wollie's) ex turns up dead by gunshot. Another murder only adds to the suspicion of her guilt. Wollie doesn't believe it, however. Wollie takes more of a backseat to the actual murder investigation in Dead Ex. She has too much else on her mind. Although, that doesn't stop the trouble from coming her way.

In A Date You Can't Refuse, Wollie reluctantly accepts a job working for a media-training company, instructing the male clientele the intricacies of dating. She would have said no had a rather pushy FBI agent not twisted her arm in spying on her boss for him. 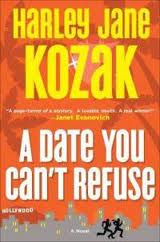 She is tasked with getting close to the boss, his family and the other employees. She hadn't anticipated that she would have to move into her boss's compound. It's a minor complication . . .

I took to Dead Ex like there was no tomorrow. I normally don't like the Hollywood scene, but Harley Jane Kozak makes it fun with her eccentric characters and their hijinks. Although I liked A Date You Can't Refuse, it wasn't my favorite in the series. Perhaps because it didn't follow the same familiar formula or featured fewer of her friends. It was a little more over the top than the other novels, although that isn't saying much. It also got a tad political--although not at all in a preachy way. I appreciated the way the book ended though, bringing closure to the series. Not that there isn't room for more if the author decides to write more though! A cozy series worth reading? Absolutely! Give it a try.


You can learn more about Harley Jane Kozak and her books on the author's website and the blog The Lipstick Chronicles in which she contributes.

Source: I purchased an e-copy of these two books.