Review: Halfway to the Grave by Jeaniene Frost 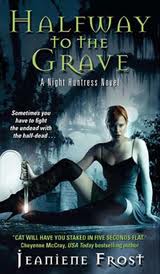 As much as I enjoy urban fantasy, I can only take so much paranormal romance. The two are so intertwined these days that it is sometimes hard to tell where one begins and the other one ends. There's definite crossover and I imagine we could get into a real debate about the classifications if we wanted to. I can't say that I do though.

Jeaniene Frost's novel is set in a present day urban setting. Her protagonist is a rare breed--half human, half vampire. Out to avenge a wrong done to her mother, Cat Crawford has made it her mission to kill all vampires she comes across. She's doing a great job too--up until she runs into the likes of Bones, a centuries old vampire who is downright sexy and on a mission of his own. The two team up to track down a very dangerous vampire with powerful connections. There is no shortage of hot steamy sex--or good fight scenes.

I confess the book was a little too sexy for my tastes, but I did enjoy the story overall. I wasn't too sure about Bones at first, but he grew on me after awhile. I think, like Cat, I needed a little convincing to be sure of his intentions. Cat herself is an interesting character. She often uses her toughness to cover up her feelings of insecurity and internal conflict. I really like Cat and appreciated the growth she made as a person over the course of the book.

I wasn't sure I wanted to continue with the series, to be honest, but then near the end the book took an interesting turn that has me seriously reconsidering. Oh, what the hey. I have to find out where the author will take me next!

You can learn more about Jeaniene Frost and her books on the author's website.
Source: I purchased an e-copy of this book.
© 2011, Wendy Runyon of Musings of a Bookish Kitty. All Rights Reserved.If you're reading this on a site other than Musings of a Bookish Kitty or Wendy's feed, be aware that this post has been stolen and is used without permission.
Posted by Literary Feline at 12/29/2011 12:00:00 AM