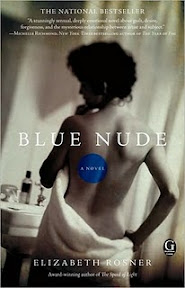 Begin anywhere, Danzig says. The shoulder, the rib cage, the thigh, the ankle. It won't be an accident, even if it feels that way right now. [pg 3]

I have never had the feeling of finishing a book and wanting to start over again right away and read it again cover to cover. Someone wrote that about Blue Nude, and so I set aside my reservations about the book and dived right in. I wanted to love it. I wanted to love the writing and the flow of the story. I wanted to love the characters. I did like Merav quite a bit. I wasn't sold on Danzig. And while that isn't always a problem, it was in this case. I never really connected with him. As the story progressed and more about his past was revealed, I did develop a sympathy for him. Even more so for his sister, Margot, who I came to love.

This is a difficult book to describe. It is at once a novel about two people struggling to reconcile their pasts and find peace within themselves and a novel about World War II, particularly the aftermath of the war and how it touched those who came directly after. Merav's grandmother had been a survivor of the Holocaust, eventually fleeing to Israel where Merav was born andraised. Danzig's father had been a German officer during the war, creating a shadow that would plague Danzig and his sister for the rest of their lives.

Danzig is a painter and art instructor. Merav is a nude model who poses for Danzig's class and awakes in him a spark of inspiration that has long been missing.

The writing was smooth and lyrical. There were several times, especially during Merav's sections when I felt the words roll over and through me, lingering and full of feeling. I also liked the format of the story--the nonlinear narratives and jumping from viewpoint to viewpoint, time period to time period. I was especially drawn to the sections of the book set in the past, particularly Merav's heartbreak and Danzig's own tragic childhood.

The war left behind many scars, as war often does. The Germans were left with much blood on their hands and how does a child reconcile that, once caught up in the fervor of nationalism? Can she? Rosner paints a vivid picture of the inner struggle of one family, while at the same time capturing the ingrained fear and mistrust of a people victimized, tortured and murdered at the hands of Germans. Danzig and Margot's story is directly tied to World War II, however Merav's is more indirectly impacted. It was an interesting juxtaposition.

Unfortunately, I never felt the book came together in a way I could truly appreciate. I know the characters found some of what they were looking for in the end, but I am not quite sure how they got there. I finished the novel feeling like I missed something important.

His gun pulled at his muscles and his knees were locked, but still he didn't make a move to pull the trigger. These people were lower than animals: this was what he'd been taught--that they were nothing to him. But meanwhile, here he was, wishing he could speak her language, whatever it was. Wanting to know her name. Needing all the blood washed from his hands. [pg xii]

For more information about Elizabeth Rosner and her books, visit the author's website.