I received Pamela Callow and Alex Kava's books for review around the same time. My husband joked that I should do a joint review given they share the same title, Damaged. If that wasn't coincidence enough, there were several similarities in terms of subject matter. The title Damaged could mean anything and yet these two authors, completely independent of each other, chose to write about the same type of crime, with quite a few similar details. Perhaps the same news stories caught their eye? It's funny how it worked out that way, and, as much as I would love to go into more detail, I would hate to spoil either book for you. Just as the two books are similar in content--at least when it comes to the crime--they are also very different from one another in feel and style, as well as in presentation. The differences in approach are such that I definitely did not get the impression that I was reading the same book twice. Although, perhaps reading both books back to back might not be the best idea . . . 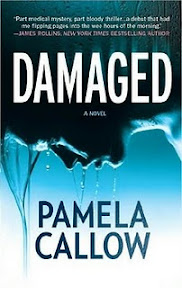 In Pamela Callow's novel, Damaged, the main character, Kate Lange, is an up and coming attorney who has just landed a job in a major law firm. She has fought hard to reach the point where she is, overcoming a past that won't seem to let go. Assigned a custody case in which a grandmother wants to take custody of her granddaughter, Kate doesn't see much hope that the grandmother can win. She tells the grandmother as much but somehow feels she should have tried to do more. That feeling turns into guilt when the granddaughter turns up dead, her body mutilated. Kate is pulled into the investigation for a killer as she is asked by the grandmother to look into the disappearances of other young girls.

To complicate matters, her standing in the law firm is on shaky ground and her very career could be on the line. Kate knows that the only one she can trust is herself, not the law partners nor her ex-fiance, Detective Ethan Drake.

Pamela Callow's Damaged was an intense read, high in suspense and full of twists that kept me guessing until near the end. The characters, including Kate, were well developed. I really liked Kate, both for her strength and vulnerability. It didn't hurt that she had a dog that was easy to fall in love with. The only issue I had, a tiny one at that, was the sexual tension that seemed to exist between Kate and just about every male in the novel. It didn't detract from the flow of the story at all, but I admit to wondering if it was necessary. Perhaps it was an effort to show how lonely and tense the characters were--or a technique to keep the reader guessing. Regardless, I thoroughly enjoyed Callow's novel and will definitely be reading more by her. 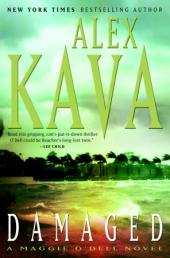 Alex Kava's Damaged also featured a strong female lead, this time a FBI profiler named Maggie O'Dell. And she, too, has a lovable dog. The book is actually a part of an ongoing series. And as has become my recent habit, I jumped right in at the end instead of starting at the beginning. Kava's novel stands well on its own. This particular book seemed much more plot driven than character driven which was perfect for the mood I was in when I read it.

In Kava's novel, Maggie is asked to assist with an investigation into the discovery of several human body parts, found floating in a chest in the Gulf right off the Florida coast. The investigation takes her right into the eye of a hurricane, one that is expected to reach terrible proportions. Unknown to Maggie, a good friend of hers is working with the Navy to uncover the cause of a mysterious illness that seems to have infected and is killing off several military personnel. He just happens to be in Florida too. The coming hurricane was given an equal weight in the novel as was the other two mysteries, which added an extra dimension to the story, helping to build on the suspense. It was an enjoyable read. Not quite as intense as Callow's book, but entertaining nonetheless.

Both novels have varying viewpoints throughout, allowing the reader to see events from different angles. Only Pamela Callow's offers a glimpse into the killer's head, careful not to reveal the person's identity too soon. It worked well for the two novels, although I confess there was one perspective in Alex Kava's novel I could have done without. His part of the story was significant but the character himself really annoyed me and I found myself wanting his sections to be over before they started.

Now that I have thoroughly confused you . . . While I liked Pamela Callow's Damaged more than I did Alex Kava's Damaged, I enjoyed reading both and hope to read more of the authors work in the future.

For more information about Pamela Callow and her book and upcoming books, visit the author's website.

For more information about Alex Kava and her books, visit the author's website.

Source: Both books provided for review.