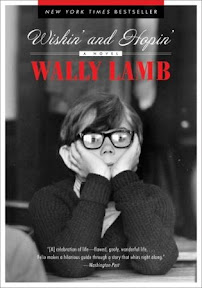 I have been a fan of Wally Lamb since I read his novel, She's Come Undone and I Know This Much Is True. He has a way of getting into the heads of his characters and bringing them to life. He tackles serious topics, steeped in emotion and morality. I knew going in that Wishin' and Hopin' was a different sort of novel for the author, but I still eagerly anticipated reading it.

Although I have never seen the movie A Christmas Story straight through (I watched the movie out of order--second half first and then caught the first half another time), the book reminded me a lot of that movie. Set in 1964, Wishin' and Hopin' is the story of Felix Funicello. His father runs a diner at the bus station and Felix is the 3rd cousin of the famous Annette Funicello. He is in the fifth grade and attends a Catholic school. Felix is the second smartest in class but is by no means a goody two shoes like the number one student, Rosalie. He gets into his share of trouble, sometimes unintentionally.

It's a big season for Felix and his family. His mother will be competing in a cooking contest on national television, he will be making an appearance on The Ranger Andy Ranger Show, and the school term promises to be an interesting one with the long-term substitute taking over his class after his regular teacher has a nervous breakdown (helped along by Felix himself).

Told from Felix's point of view, it was hard not to imagine being right back in the fifth grade again, a time between innocence and learning about the world. The characters are easy to love, especially young Felix. The author captures well the time period in which his story takes place, from the political and racial climate to the memorable pop culture--even for those of us born after that time.

I started singing Annette Funicello's Tall Paul right alongside Felix as I read in the lunchroom at work one afternoon. And then I couldn't help but do the same when Felix described his Halloween costume, dressed up as an Alka Selzter. I've been driving my husband batty with that jingle for years. Wishin' and Hopin' is a delightful story. Author Wally Lamb shows off his lighter side in this novel. It is funny and at times sentimental, but never overly so. It's a great book to kick off the holiday season.
Rating:


I hope you will check out what others had to say on the TLC Book Tours route!