From the Archives: Reading Lolita in Tehran by Azar Nafisi

I began keeping a reading journal several years before I began blogging. I find it interesting to sift through my thoughts of books that I read back then. My views in relation to Reading Lolita in Tehran became quite heated as you will see in my journal entry from March 2005: 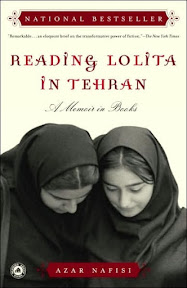 Fiction was not a panacea, but it did offer us a critical way of appraising and grasping the world—not just our world but that other world that had become the object of our desires. [pg. 282, Reading Lolita in Tehran]

As I began to read the last chapter before the epilogue of Azar Nafisi’s Reading Lolita in Tehran: A Memoir in Books, I found myself thinking of the movie Finding Neverland, the story about J. M. Barrie’s creation of Peter Pan. Both spoke to the power and necessity of imagination in our lives. In Reading Lolita in Tehran, Ms. Nafisi shares just how important the imagination played not only in her life but also in the lives of her students—all in the form of the novel.

There were a couple of moments when I felt as if I was missing part of the meaning behind her story because I had not read many of the books she mentioned nor studied the authors to the degree that she had. It is obvious Ms. Nafisi loves literature and takes every opportunity to delve into its depths, the authors’ motives for writing, and the impact it will have on those who read it, including relating it to her students’ lives and circumstances.

What I found most interesting was her own story, about her life in Iran. She described the changes Iran underwent after the revolution: the people seeking change and inevitably of what they ended up with. She wrote that the morality squads, the executions, the rigid laws, the lessening of the people’s freedoms, including and especially those of the women, were partly the fault of the Iranian people who did not fight against them in the beginning. And while they might not have known to what degree or form the changes would eventually bring, she believed that their complacency played a part in making it a reality. This is not a new phenomenon, however, as history has demonstrated throughout the years.

This book is especially interesting in today’s climate, as the war in Iraq wages and the Middle East and terrorists clamor for “the death of America.” The blind hatred toward my country and people astounds me. There is no distinction between what may be good about the so-called Western World and that which they consider evil as it is all considered evil; there is no interest in making peace other than through total destruction. There is no attempt at understanding, finding a way to compromise, or even for tolerance. Only hate and blame. It saddens me that there are people out there that harbor such strong anger towards me without knowing anything about me. That anger and hate seem to be based on ideas or assumptions that they know little about. And they do not want to know. Those that subscribe to such radical views are unwilling to face themselves and their own corruption and hypocrisy. It’s much easier to cast the blame outside of themselves rather than to look inward and try to improve their own failings and build on their own strengths. Of course, such people would rarely, if ever, admit that they have faults. They cast stones at others and yet are just as guilty—perhaps of the same or of different crimes. It’s different though, they may say. And they believe it. How do you counter that? People like that seek to oppress anyone who may be different even in the slightest of ways and to destroy that which does not support their beliefs. They feel threatened and therefore act out violently against those they don’t understand or who question them. There are people like this all over the world, and not just in countries like Iran or Iraq. Even in America people like this can be found, only with a different “perpetrator” to blame and be the target of that persecution and hate.

Perhaps because I am a woman, I am drawn more to the plight of women who are oppressed within their own homelands. In Iran, it is even more astonishing that a country that was once so forward thinking and progressive could revert to oppressing a previously respected and strong group of people in their society: the women. It is argued that the women need protection—that the less freedom they have the safer they will be. They are treated like second, if not third, class citizens.

I have no doubt that my own westernized upbringing and ideology color my perception of what should be and how people should treat one another, regardless of religious affiliation, ethnicity, gender, color or creed. I cannot fully grasp the life and culture that Ms. Nafisi spoke of in her book, other than through what I may hear or read about in books and the media. Ms. Nafisi herself was considered westernized; she attended school in England as well as in the United States. I would like to have had the opportunity to read a similar memoir written by one of the women in her reading group, those who were not exposed to the western world initially (other than through literature and media) and who had very little notion of what life had been like before the revolution.

Reading Lolita in Tehran: A Memoir in Books was thought provoking. It provided a look into the life and experiences of one woman in Iran as well as those around her and the part that fiction played throughout.

[ . . . what we search for in fiction is not so much reality but the epiphany of truth. [pg. 3, Reading Lolita in Tehran: A Memoir in Books]

Source: The book was loaned to me via a bookring sponsored by a BookCrossing.com member.