Thanksgiving: Then and Now 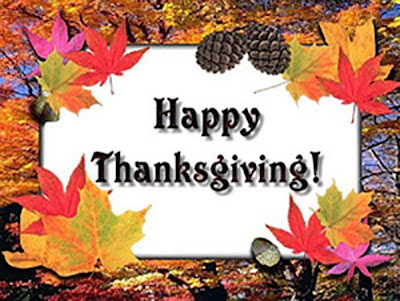 Today was Thanksgiving Day in the United States of America. For many, it is the most important holiday of the year. It is a time when families join together and share a meal, reflecting on their lives and giving thanks, appreciating life. For some people, Thanksgiving is about parades and football and cooking. It's about that turkey dinner.
Growing up, it was like that for me. No matter whose house the Thanksgiving family gathering would be held, the men would settle around the television set to watch football or crowd around in the living room to play with someone's new gadget, and the women would gather in the kitchen to prepare the food for the big meal. Except my Grandpa John. He always had a foot in both rooms. Now that I think about it, I can see where my mom inherited her need to be constantly moving and doing something.

As for my brother and I, the only children in the crowd, we'd often be off playing or occasionally put to work by one of the women. Or you might find me tucked away somewhere reading. "Come join the rest of the family" was a refrain I heard quite often. Sometimes my grandfather would put us to work, raking leaves in the yard. I remember many a year when we would jump in those piles, burying ourselves in the yellow, red and orange leaves. (Or maybe this is actually a Christmas memory . . . the weather between Thanksgiving and Christmas is not all that different in many parts of California.)

I was often tasked with setting the table, but I never felt welcome in the kitchen. I jokingly tease my mother sometimes that my aversion to cooking was borne during those early years when I was always shooed out of the kitchen. Something about too many cooks and my being in the way. You were more likely to find me on the clean up crew. There could never be enough hands involved with that. Scraping leftovers into tin foil and plastic containers, everyone laying claim to what they might want to take with them. The hostess always hoped someone would want to take home some of the leftovers so she wouldn't be stuck with them all.

Then the real clean up would begin. I made a good dryer. The older I became, I often would take on the scrubbing as well. Yes, there was an actual dish-washing machine, but, you see, big holidays like this often require that the good china that has been collecting dust in the cabinet be used--and, of course, the good china is not "Dishwasher Safe". Those dishes, pots, pans and utensils that were dishwasher safe could never just be loaded into the dishwasher rack. No, they had to be scrubbed and free of any food remnants before being placed in there. What's the point of having a dish-washing machine if I have to wash everything by hand anyway, I often asked my mother.

Before we could eat, we had to say a prayer of thanksgiving. We would all stand and take each others hands. Some years each of us would offer up thanks, one at a time; while at other times, one person would give thanks for all of us. I always took the Thanksgiving prayer very seriously, putting my entire heart into it, always silently--my private conversation with God.

My brother and I were not big fans of the actual Thanksgiving meal. Neither of us really liked turkey (we grew out of that, thankfully) and so inevitably someone would make my brother a hot dog (he was the Hot Dog King). I have no memories of getting out of eating the "adult foods" myself though. All I remember is being envious of my little brother who always seemed to get out of eating what everyone else was eating. I am sure I could of eaten a hot dog if I wanted. But, well, I didn't especially like hot dogs. What I did love, however, were those yams smothered in marshmallows. It was like eating desert for dinner. Yum! It's still one of my favorite dishes. Although why anyone would want to ruin it by putting bacon in is beyond me. My second favorite part of the meal was the mashed potatoes. And the bread. Not exactly the healthiest choices.

Of course there was also pie. Pumpkin was always my favorite. My mom's pumpkin that is. I've yet to find anyone who makes it just the way she does. Add a dollop of whipped cream on top and I was in heaven.

Before all of that though, before we even left the house or the guests began arriving, Thanksgiving Day always would start with the Macy's Thanksgiving Day Parade. I loved the floats best when I was a child. And I enjoyed making note of whether the marching bands were in step. As I got older, the Broadway dance routines would most catch my eye. Okay, so they weren't actually a part of the parade, but oh, how I loved to imagine myself as one of the singers and dancers. (Confession: I still do.)

After everything was said and done, the leftovers put away and the dishes clean, it was time to go. Goodbyes were said, hugs exchanged. We would all go our separate ways. I was often relieved it was finally over.

For the past few years, my husband and I have chosen to celebrate Thanksgiving in a different way. We avoid the rush of travelers and our house does not smell of a roasting turkey. At first it was because of our work schedules. We live several hundred miles away from both of our families. My husband often had to get back to work the day after Thanksgiving and so travel was out of the question. We've grown to appreciate our own little tradition. Sometimes we go out and see a movie. One year we joined the crowds at Disneyland (and, boy, was it ever packed!) Since discovering that Marie Callender's Restaurant stays open for the holiday, we began going there for our Thanksgiving meal. None of that dreaded cooking (you know I don't like to cook, right?) and clean up. Many people evidently have the same idea because every year the restaurant is full of people, large and small parties taking advantage of the open restaurant.

It never fails that each year people ask me what my plans are for Thanksgiving, am I cooking or are we visiting relatives? Sometimes I can detect a glimmer of pity in their face when I tell them neither, that my husband and I are spending the day by ourselves and going out for dinner. For so many, Thanksgiving is about those family get-togethers, the bad and the good, and that home cooked meal. I, on the other hand, have grown to like the quiet of the day. I prefer it, really. I like being able to spend the day with my husband, just the two of us and the animals. I still give thanks. I still reflect on the positives in my life and how lucky I am. And I am very lucky. I have so much to be thankful for.

A coworker approached me yesterday and said, "I hear you are going to Mimi's tomorrow!" Her eyes were bright and she had a big smile on her face. I actually had no idea that Mimi's was open for Thanksgiving. I wish I had; I wouldn't mind having Thanksgiving there. I hear they have their full menu available. There was an instant spark between us, one of shared understanding. As crowded as the few open restaurants are on Thanksgiving Day (and believe me, they are often crowded!), I haven't known too many people in my own circle who prefer to eat out on the holiday. Like me, she spent the day with just her husband and son, which is how she prefers it.

Anjin and I did not go to Marie Callender's this year. Instead we decided to try something a bit different and went to Claim Jumper. The food was good and our bellies are full. I even brought home leftovers. Now we are going to settle in and enjoy the rest of the evening. Maybe take a nap.

However you spent the day, whether you celebrate Thanksgiving or not, I hope you all had a wonderful and fulfilling day.

Those of you who are going to brave the Black Friday* shopping crowds, more power to you! When Anjin and I were out and about last night, we noticed people with sleeping bags and camping gear already lining up outside the local Best Buy (electronics store). Imagine spending Thanksgiving that way! For some people though, it's their tradition. And they love every moment of it. I can appreciate that.

How did you spend your Thursday? Are any of you Americans planning to brave the crowds this Black Friday*?


*For those who may not know, Black Friday is the official kick off of the Christmas shopping season. It falls on the Friday after the American Thanksgiving Day. Many stores boast huge sales and offer unbelievable deals good for just the day in order to lure in customers, sometimes opening up in the wee hours of the morning. It's a tradition for many Americans to be up before dawn, waiting in line at the stores, hoping to get the best deals.

Ten Things I am Grateful For This Year
1. My husband continues to be my rock. He is my best friend and I love him so.

2. My cats and dog bring me such joy and fill my heart with love.

3. My family and friends, including my online friends (that means you!). I have gained so much by having them (and you) in my life.

4. My job. I am lucky to be in a job I like and to be working for a manager who is not only supportive, but gets me.

5. My husband's job. In this economy, I am just grateful we are both able to continue working.

6. My freedom and those who strive and fight to protect it.

7. The roof over my head and the food on my table.

8. All the Americans who are working today, despite it being a national holiday, including the wait staff, cooks and hostesses who gave up their Thanksgivings to serve those of us who didn't want to cook for ourselves. And especially those in emergency services or on standby who are there when we need them most.

9. My love for reading and books, and a special thanks to the authors who share their stories with the rest of us.