Tears of the Desert: A Discussion with Nat from In Spring it is the Dawn

I was both nervous and excited when Nat, aka Tanabata, from In Spring it is the Dawn approached me about doing a buddy read. I have participated in group book discussions online, but my experience with buddy reads is very limited. Nat made it easy for me. She is extremely kind and patient. My anxiety over being too busy or preoccupied turned out to be for naught as she was just as busy as I was. As a result, we made the perfect match. In between our many obligations, we were able to squeeze in Halima Bashir's memoir Tears of a Desert. Take a peek at our discussion: 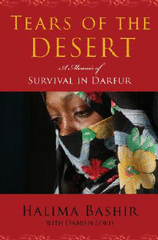 Tears of the Desert: A Memoir of Survival in Darfur
by Halima Bashir
Ballantine Books, 2008
Nonfiction; 316 pgs

In the winter of 2003, the Sudan Liberation Army and Justice and Equality Movement acted out against the injustice they saw taking place in their country. Black Africans were being oppressed and treated like second class citizens by the government. The government retaliated with more violence, taking it to an entirely different level. Not only were the soldiers in the rebellion targeted, but the innocent as well. Children and women are being raped, entire villages wiped out, and survivors are forced to leave the country or hide or risk certain death. The Sudanese government controls the media within the country and has continuously tried to control the truth going out.

Halima Bashir is just one person who was caught up in the conflict. Her memoir, Tears of the Desert, is her attempt at giving voice to the hundreds of thousands of people who have been murdered and displaced by the Darfur conflict.

Darfur. I know to you this must be a word soaked in suffering and blood. A name that conjures up terrible images of a dark horror and an evil without end. Pain and cruelty on a magnitude inconceivable in most of the civilized world. But to me Darfur means something quite different. It was and is that irreplaceable, unfathomable joy that is home. [pg 4]

Wendy: I am not really sure what draws me to books like this. The Holocaust has long been a part of history that has frightened and moved me. It is a time in the world’s history that is so painful, not to mention shameful. And not just for those who were directly involved. It is a blight on all our records. Stories about the Holocaust are told and re-told, the hope is that the same mistakes won’t be repeated. But they are. Again and again. The Holocaust was not the first instance of genocide nor was it the last. While the murder and rape of hundreds of thousands of black Africans in Darfur has not been labeled as genocide by the United Nations, it is still an atrocity that cannot be justified.

Nat: I know what you mean. Sometimes I shy away from these kind of books because I know that the stories told within will be painful and perhaps hard to read, but at the same time I think it's important for us to read these stories so we can be more aware of the terrible things that are unfortunately still happening in the world today. It's easy to be complacent while watching the news about countries half a world away from us, thinking that it doesn't affect us. But then the news, when it even reports it, only focuses on numbers and facts. Reading Tears of the Desert, and getting to know Halima and her family through the pages of the book, really put a human face on the tragedy occurring in Darfur.

Wendy: I appreciated how Halima Bashir told her story. I have read other books on Darfur that focus on the conflict and the atrocities. Halima wanted to offer a more well rounded picture, I think, and she did excellent job for someone like me, who has never traveled to Sudan nor experienced a life like the one she has lived. The love for her country, her village and her family came through—I could not help but love them too. I was quite fond of her grandmother. She was so full of spirit. She may not have always been the wisest of women in her decisions, but it was impossible not to respect her.

Nat: The grandmother was quite the character, wasn't she? Some of her choices were more detrimental than helpful but she was a strong, determined, courageous woman and everything she did was out of love for her family. She ended up being a great role model for Halima and it seemed like a lot of Halima's later bravery was drawn from her grandmother's strength. Her grandmother would've been proud of her, I think.

I really enjoyed how Halima told her story too. I loved how she started off with her childhood, showing how happy she was growing up in her village, surrounded by her family. It's what made her story all the more moving for me, knowing that the bad was yet to come, but that it would come.

Wendy: No conflict arises out of nothing and it was interesting to see the growing discontent in the country through Halima's eyes, especially during her younger years. She is an amazing woman. She has so much courage and strength. Despite the odds that were definitely not in her favor, she continued to work toward her dream of becoming a doctor.

Nat: I have nothing but respect for her, for all she went through, for all she endured to achieve her dream of becoming a doctor, and to help her fellow Zaghawa. In the book she doesn't focus on the politics too much but of course some of it still comes through, mostly in discussions with her father. I'm admitting my ignorance here but one thing I hadn't really realized was the involvement of the British, by installing the Arabs to govern Sudan, in helping to create the atmosphere in which this conflict would eventually ignite.

'Back then the British came to our country for one reason,' my father continued. 'They came to take what they could for themselves. They took the land to grow their crops; they took the mountains to mine gold; and they tried to take the people to work for them. But we Zaghawa resisted, and we were never truly conquered.'

My father glanced at me, his eyes glinting. 'But you know the worst thing the British did? The very worst? When they left they gave all the power to the Arab tribes. They handed power to the Arabs. Now that's the sort of things you should be learning at school.' [pg 100]

Wendy: I was also really taken by her experiences as a refugee in England, the struggles she had to go through there. It must have been so difficult for her being in a strange country, surrounded by strangers and the unknown. While I have moved around a number of times in my life, it was always within my own country and I was never completely alone. My heart ached for Halima.

Nat: I also found that part of her story interesting. As if surviving, and managing to escape that hell wasn't hard enough, without having to fight to not be sent back there. I suppose in some ways she was lucky to have people who were willing to help her, but lucky seems the wrong word entirely considering all that she lost.

Most of the articles and interviews took place in 2008, when the book came out, and I can't seem to find any updated information on the internet. I know that she has won her case and has been granted asylum in England, and I only hope that someday she will be reunited with the rest of her family. This was truly a touching story, and one that I think everyone should read.

Wendy: Like you, I scoured the internet in search of some sign that Halima was reunited with her family but to no avail. So many families in Darfur have been torn apart by the crisis. My heart goes out to those families.

My heartfelt thanks to Nat for reading Tears of a Desert with me. Halima's story is one I will not soon forget.


The crisis in Darfur and other African countries have struck a chord with both Nat and me. We decided we had to do something, however small. Earlier this year, we both signed up for The Year of Readers Project in which we read for a charity of our choice that focuses on literacy and reading, raising money as we go. Nat and I both are reading for the Book Wish Foundation:

We focus on people in long-term crisis situations because they may face problems so grave that reading relief is not a major component of the aid they receive, although reading may have a great positive impact on their lives. Refugees, internally displaced people, school-aged children not in school, the homeless, the critically ill, and the desperately poor are among the populations we aim to reach.

I am a strong believer that literacy and education empower people, adults and children alike. The year is not yet over. If you would like to sponsor Nat or me (or both if you are feeling really generous!), either by donating a lump sum (any little bit helps) or per book read, you can still do so. Just let us know. Or, you can donate a little something directly to the cause if you prefer.