From Book to Film: Push to Precious 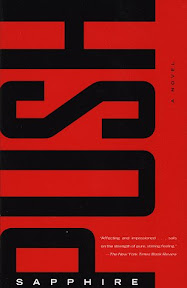 She say, "Write." I tell her, "I am tired. Fuck you!" I scream, "You don't know nuffin' what I been through!" I scream at Ms Rain. I never do that before. Class look shock. I feel embarrass, stupid; sit down, I'm made a fool of myself on top of everything else. "Open your notebook Precious." "I'm tired," I says. She says, "I know you are but you can't stop now Precious, you gotta push." And I do. [pg 97]

Book Source: Paid for with my own hard earned cash.
Rating:

Several months ago I was approached by a coworker and asked if I had read Sapphire's Push. She had seen a trailer of the upcoming movie and knew she just had to see it. When she discovered it was based on a book, she thought of me.

Push is not one of those novels that will appeal to everyone. It may offend some. It is a book that will drag out the reader's darker emotions: anger and sadness. It did for me, anyway. I read this book with tears in my eyes. I had a few choice names for the mother and father. My heart ached for Precious Jones. No child should have to endure what she did. No child. Ever. And yet it is also a story about hope and overcoming the odds. In that way, it is an inspirational novel.

My coworker insists that the novel is based on a true story, but I haven't been able to verify that. As far as I know, it is a work of fiction. However, before you take comfort in that, keep in mind that about 1 out of 4 girls in the U.S. are sexually abused (1 in 6 boys). Most sexual abuse occurs by someone close to the child, someone the child is supposed to trust. Precious' own story may be fiction, but many children throughout the world suffer in similarly every day. They endure not only sexual abuse but physical and emotional abuse as well. They fall through the cracks of our school systems, barely able to read and write, even by the time they are in their teens. I know. I've seen this first hand.

Sapphire tells the story using Precious' own voice, in Precious' vernacular. Words are spelled out phonetically, there are plenty of curse words, and certain phrases and concepts are repeated several times; while this might seem like it would be bothersome, it was not at all. If anything, the writing style gives voice to the character, putting the reader in her shoes if only for the span of the novel. It did not take long for me to fall into the rhythm of the story.

Precious is 16 years old at the start of the novel, pregnant with her second child. She had given birth to a daughter when she was only 12 years old. The father of her children is her own father, a man who has been raping her since she was a young child. She is extremely overweight and the butt of many jokes. Precious has a very limited world view, which is expanded through the course of the novel. All her life she has been alone, friendless and with hardly any support from others. Her mother is downright evil, beating her daughter regularly. I could not drum up an ounce of sympathy for Precious' mother. I don't think I was meant to.

Kicked out of junior high because she is pregnant, Precious is told she must attend an alternative school. It is there where she meets Blue Rain, an unorthodox teacher who draws Precious and her classmates out. For the first time in her life, Precious feels like she belongs somewhere. She connects with her classmates and teacher. She experiences the kindness of others, something completely foreign to her. She also comes to realize she is not alone.

Precious is one of those characters I wish I could reach into the novel and hug, reassuring her that she is beautiful and smart, and that she doesn't deserve the abuse she has suffered. She is courageous and good at heart. She thinks so little of herself and yet there is a spark deep inside her that keeps her going. She isn't completely without self-confidence, though it is extremely fragile. She craves praise and eats it up when it is offered. Reading the stories of her classmates, I felt the same way about them. Each of them also had suffered much in their short lives, enduring pain and loss that no child should have to endure.

Blue Rain realizes right away that the young women in her class need to learn to believe in themselves. She could easily stick to the curriculum and prepare them for the GED. She wants to do more than that for them, though.

Precious can barely read or write at the start of the book, and, as the novel progresses, the reader can see the growth she makes in the narrative. While this novel is a horror story in some respects, it is also an inspirational one. My heart broke for Precious time and time again. It also swelled at her successes, even the smallest of ones. Push is no fairy tale. There is no miraculous happy ending. Everything does not turn out perfectly in the end. What there is, however, is hope.

I couldn't help but think of Toni Morrison's The Bluest Eye as I read Push. Many of the same themes run through both novels. The Color Purple by Alice Walker also came to mind which turned out to be quite fitting given the novel is referenced frequently. Precious identifies with Celcie from The Color Purple.

I think it is important not to overlook the cultural aspects of the novel. Precious is a black young woman, living in the Bronx with her mother who is collecting welfare. Discrimination is nothing new to her. She does not trust the authorities nor most white people. She spends much of her time wishing she was lighter skinned and thinner. What happened to her would not have happened had she been white, she reasons. One of my favorite scenes in the novel is when she attends her first Survivors of Incest Anonymous meeting. She walks in feeling alone, as if no one in the room will be able to identify with her or understand the horrors she has suffered. She walks out with the realization that she is far from alone and that what happened to her could have happened to anyone, regardless of race, size or economic background. Child abuse has no boundaries when it comes to culture. It affects us all regardless.

Push is one of those novels I can talk about forever if given the chance. I have given you a small taste of it here and hope you will give it a try. And if you are up for it, you might want to watch the movie too.

Movies based on books are rarely as good as their predecessors. We all know that. Some of you may avoid watching movies based on books you have read for that very reason. Others, like me, run to the movie theater (or the Netflix website) to see how those movies turned out.

Because of a summer movie with the same title, Push became Precious when it hit movie theaters. I couldn't wait the couple of days it would take for the movie to appear in a theater closer to my town, and so I dragged my husband to Los Angeles so we could see it at the ArcLight in Hollywood, where it opened its first weekend in limited release.

I have already talked at length about the book and so will not do so again while talking about the movie. All I really have to say is wow. Precious is quite a movie. The rave reviews you hear about Mo'Nique serving up an Oscar worthy performance as the mother is true. It was raw and oh so real. The final scene with Mo'Nique in the film is especially gut wrenching. Gabourey Sidibe who played Precious was outstanding in performance too. She had the same edge as the character in the novel, the same heart, and won me over just as quickly. I had been a little worried about the dream sequences going into the movie, but my concerns were unwarranted. While they were a bit more of a spectacle in the movie than they had been in the book, they were well placed and definitely worthwhile.

The movie differs from the book in a few ways, including the ending--although the overall feel of the two were much the same. I really don't feel pointing out the differences matters as a result. I think the only complaint I have about the movie is that I wish I'd gotten a little deeper look at Precious' classmates. I understand, though, the decision not to go that route. Movies have time limits and not every detail from a book can make it onto the big screen.

The movie enriched my appreciation for the book and vice versa. Just as in the book, I watched Precious grow from victim to survivor. While her overall story is terribly sad, her courage and hope make her an inspiration.