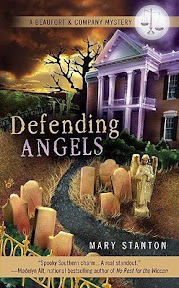 The room was completely lined with bookshelves that ran from the twelve-foot ceiling to the floor. And the shelves were stuffed to overflowing. Books were everywhere. Leather-bound, paperback, hardcover, skinny, enormously thick—it was overwhelming. Bree recognized a complete edition of the Oxford English Dictionary. Underneath it were rows and rows of books bound in tan leather with a red band across the spine. That weird sense of being pulled in two directions went away, to be replaced by a feeling of total contentment. This was a library, and Bree had always loved libraries. [pg 57]
Defending Angels by Mary Stanton
Berkley Prime Crime, 2008
Mystery (Fantasy); 294 pgs

There was quite a lightning show yesterday. The thunder was so loud that it shook the building. I worried all day about my cats, imagining them shivering in fear under the bed while I was stuck in my office wishing I had a better view of the sky. I was not so worried about Riley, my dog. He's rather fearless even if excitable.

After I got home from work and had settled in, the thunder and lightning came in quick succession. Riley started barking and chasing the cats who were trying their hardest to reach the bedroom and their safe place. This was the first time he had ever really reacted to the thunder. I sat him down and explained that it was nothing to get excited about, just the gods bowling. Even they need to take time out and play. Perhaps Riley actually understood what I was saying, but the truth is he probably hadn’t a clue. More than likely it was my tone of voice, body language, and my stroking of his back that did the trick. But I'd rather think it was the story.

I cannot remember if it was my grandfather or father who first told me the story about the gods with their bowling balls: the thunder being the sound of the ball striking the pins and the lightning being the celebration that follows. Maybe you’ve heard the story too? It's one that calmed the nerves of a frightened child.

But what if it weren't the gods who were bowling, but angels? I can see it perfectly in my mind's eye . . .

Brianna (Bree) Winston-Beaufort is striking out on her own, having inherited her eccentric uncle's law practice in Savannah, Georgia. She could not be more excited: it’s an opportunity to prove herself and to move away from her well-meaning but overbearing parents. Unfortunately, her uncle's law office fell victim to fire, and so Bree is forced to find a temporary working space during the renovation process. She finds a house on Angelus Street that is too good to pass up. The price is right and the landlady, Lavinia, won't take no for an answer. The catch? Her new offices are located in the middle of a cemetery. And not just any cemetery. It is a murderers’ cemetery where the bodies of murderers have been buried.

In Defending Angels, Bree sets up office, hires staff, rescues a dog, and takes on her first client. She's been hired by the assistant of a recently deceased, extremely wealthy businessman to prove that his death was no accident despite evidence to the contrary. Bree is more than skeptical of her client's allegations, especially when she learns the client says she knows it was murder because the man's ghost told her so. Still, the former assistant is her client, and Bree must represent the client's best interests.

Bree turns on her Southern charm as she looks into the possible murder of the businessman, Benjamin Skinner. The more she digs, the more she begins to believe her client may just be right. And soon it isn't just her temporal client she is representing, but Benjamin Skinner himself, who is facing serious charges in a very different type of court, the Celestial Court.

It's impossible for Bree to ignore the strange things going on around her. Ghostly white faces that appear in her window, a horrid painting that has a life of its own, and staff that seem to have unearthly—dare I say, angelic—abilities. And what of Gabriel Striker, the private investigator who always shows up just when trouble is brewing? Bree quickly learns that there is much more to the law practice she inherited from her uncle than it at first seemed. She may not represent the most innocent of clients, but even they deserve a fair and just attorney on their side.

Bree manages to maintain her head through it all (although there are moments when she doubts her own sanity). I really liked how the author, Mary Stanton, kept the reader in the dark and just as confused at times as Bree. As Bree learns and adjusts to her new life situation, so does the reader. Bree's focus on the task at hand certainly is, in part, what keeps her moving forward.

The narrative is witty, fast-paced, and, of course, entertaining. I enjoyed the time I spent with Bree and her family and friends, and even getting to know her ex-boyfriend, Payton the Rat (who has well earned that name). Sasha, Bree's dog, will quickly win over the hearts of readers. I couldn't get enough of Bree's sidekicks, Ron and Petru. And I'm dying to spend more time in Lavinia's room upstairs.

I did not hesitate to jump right into Angel's Advocate upon finishing Defending Angels. In the second book of the series, Bree's aunt asks her to take on the defense of a rather unruly teenager, Lindsey Chandler, who assaulted and stole the money of a Girl Scout. Bree isn't sure how she can help--or if she'll be able to do much for the child, but she agrees to at least give it a try.

As it turns out, someone else needs her assistance as well. Lindsey's father died in a car accident four months before. Probert Chandler was a man who had lived a modest life despite his wealth. He had been found guilty of serious charges in the Celestial Court, however, and had filed for a retrial and Bree is his designated attorney. Bree has her hands full. Lindsey is out of control, and her mother does not know what to do with the child. Not to mention the long list of suspects who may be embroiled in some sort of trouble related to Mr. Chandler and his business. And does it relate to Lindsey and all the trouble she manages to find her way into? Bree has quite a knot to untangle in order to find the truth.

If that wasn't enough, it appears two bodies have disappeared from the cemetery surrounding Bree's office, and the murderers' spirits are out to stop Bree. Someone isn't happy she picked up where her uncle left off.

Angel's Advocate was just as exciting and fun as the first book in the series. The reader is reacquainted with old characters and meets a slew of new ones, each of them interesting. I could just picture Belli and Miles, Bree’s most recent guardians, crammed into the back of Bree's car everywhere she went. And, of course, I was happy to see Sasha by her side.

In preparation for writing this series, the author did extensive research into the subjects of angels and early Christianity. The foundation of the Beaufort and Company series is built loosely on 11th and 12th century medieval theology, which was influenced by the world's major religions of the time: Judaism, Christianity and Islam. The author also drew on Chinese religions as well. I found this especially fascinating and admit it makes the series even more appealing to me. Mary Stanton has created an intricate and detailed world that I am looking forward to exploring further with each novel.

Bree has an interesting back-story that is threaded throughout each of the novels and most likely will continue in future books. So, while each book can stand well on its own, there are personal story lines that carry over and might be best read in order.

Despite the somewhat frivolousness of the novels, they do have a darker side. The more I delve into the "cozy" sub-genre, the more I am discovering how wrong my early conceptions were. Charlaine Harris, Clea Simon and now Mary Stanton are among the authors who have shown me the light. I like edge to my mysteries and The Beaufort and Company mysteries certainly contain that. 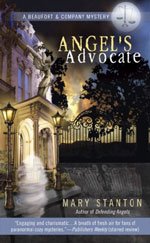 “I think I made a mistake when I decided to go to law school instead of becoming a veterinarian.” [excerpt from Angel's Advocate]

Check out Mary Stanton's website for more information about her and her books. And if you haven't already, take a look at my interview with the author.
Posted by Literary Feline at 6/04/2009 11:30:00 PM