Review: A World I Never Made by James LePore (& A Word from the Author) 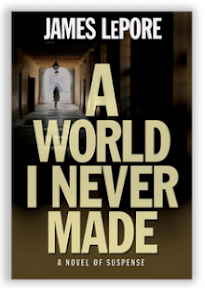 She's dead, Pat wanted to say. I'm too late. But he could not form the words. He heard them echoing in his head, but though he tried he could not get them to his lips. Then suddenly he was crying, holding his hands to his eyes to hide his tears. [pg 13]


A World I Never Made by James LePore
The Story Plant, 2009
Suspense/Thriller; 262 pgs


The novel, A World I Never Made, opens with Patrick Nolan sitting across from a French Inspector. He holds his daughter's suicide note in his hands. He had never been close to his daughter, Megan. After his wife died while giving birth to their only child, Pat held onto his guilt and kept his distance from her. Megan's death brings his regrets to the surface. Only, as Pat will soon discover, it is not Megan's body which lies in the coroner's office. Under the impression that Megan was trying to fake her own death, Pat remains silent, going along with the ruse that his daughter is, in fact, dead.

Officer Catherine Laurence of the judiciary police is assigned to keep an eye on Pat Nolan. He is not the only one who knows his daughter is not truly dead, and there are those in power who hope he will lead them to her. Megan's name has turned up on a terrorist watch list, the Saudi police claiming she was involved with the planning of several suicide bombings in Morocco.

Catherine and Pat are thrown together in the search for Megan when they realize someone else is stalking Pat as well--someone who is much more dangerous, and those under his order will not hesitate to kill everyone in their wake. Pat and Catherine must get to Megan before those she is hiding from find her first.

Woven between the chapters of the race to find Megan, is the story of why Megan has gone into hiding, of why she felt the need to lie about her death. Megan, a freelance journalist, has always been an independent spirit, headstrong and motivated. She goes after what she wants, be it a man or a news story. And, in this case, she goes after both. There is much more to her current lover, Abdel al-Lahani, than she at first realizes. She soon finds her very life on the line, and she must flee before it is too late.

The two storylines eventually intersect, the pieces of the puzzle falling into place. Author James LePore has crafted an exciting and heart pounding novel. A father and daughter lost to each other for most of their lives rediscover each other as death chases right on their heels. The death of his wife Lorrie had devastated Pat. He blamed himself. He closed himself off from not only his daughter, but also from letting anyone into his heart. Believing his daughter was dead, even if for a short while, changed all that, as did his meeting of Catherine Laurence, the beautiful detective who carried her own baggage. She, too, had a well guarded heart. At first I wondered at their falling for each other so quickly given their defenses, but taking into account the high emotions, their current circumstances and the common bond they felt for one another, it does fall in the realm of believability.

I was not sure I would like Megan at first. She uses men and in the beginning came across as cold and calculating. She grew on me though. Like her father, she is a complex character with many layers. Her father's absence in her life wounded her and has influenced her life choices. She is intelligent and has a confidence and strength about her, which has seen her come out on top more often than not. It is easy to see why she was drawn to Lahani. He is charming and mysterious. They are very similar in that they hold parts of themselves back from one another. Neither wanting to let the other in, at least not completely. This in juxtaposition to Pat and Catherine whose hearts are just beginning to thaw.

The novel takes the reader all over Europe and North Africa, including France, Germany, the Czech Republic and Morocco. James LePore puts the reader right there in the midst of it all. His descriptions of the locales and people are rich and detailed, which is balanced out by the crisp dialogue.

I was most fascinated by the gypsies. They played a significant part in both Megan and Pat's stories. Their own history and mysticism is touched on ever so slightly in the novel. Having just read Precious by Sandra Novack, in which the mother was born to a gypsies during the Second World War, my interest was particularly heightened as I came across mention of that again in A World I Never Made.

Another aspect of the book that interested me is related to Megan's journalistic work: the culture and influence of Islam, particularly that of fundamental Muslims, in European countries, such as France and Spain. It is not something I have given much thought to but is worth looking into further for a better understanding of world events.

It was easy to get swept up in James LePore's novel. His writing is beautiful and the story is captivating. I really grew to care about the characters, especially Pat. It is a shame it ended so soon.

I have not had a chance to do much traveling to other countries, and while reading about them is no substitute, it does offer me a glimpse into cultures and places I have never experienced. With the traveling I have been able to do, mostly within my own country, I know exactly what James LePore means when he says traveling "stirs the imagination." It certainly does mine! Please welcome author James LePore to Musings of a Bookish Kitty! 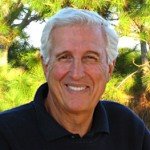 Wendy has asked about the research I did for A World I Never Made, which I am happy to write about because in doing it I get to relive the travels I took to places that ultimately became the venues--France, North Africa, The Czech Republic--for the novel. I made those trips in the late nineties, primarily to take pictures, but when it came time to write A World I Never Made, I found that I had done research by osmosis; images, sights, sounds, people, places, even smells, came back to me with such vividness that I knew I could describe them not only credibly but in a way that put the same scenes as vividly, or nearly so, into the reader’s mind as he or she went through the book. The thing about traveling, I think, is that it stirs the imagination in ways that you don’t know are happening, a sort of stealth insight is gained that you don’t know you have until you sit down later and start to create something, a painting for example or in my case a novel. A World I Never Made started with the idea of an estranged father and daughter and what road they might take to redeeming what they thought was a lost relationship. It became a thriller or suspense novel as well, with settings that are inherently romantic to a reader, a combination that I could not have accomplished without buying those airline tickets.

The rest of the research I did on line. Questions like how the French police jurisdictions are structured, or the timeline of the EU opening its internal borders, were all answered via search engines. I will tell you one secret: The Falcon of Andalus was a stroke of luck. I found him while researching the history of Islam in Spain, and I knew I had to use him somehow.

* * *
Check out James LePore's website for more information about the author and his book. And visit TLC Book Tours for a list of James LePore's tour stops!

Many thanks to author James LePore and TLC Book Tours for the opportunity to be a part of this book tour.