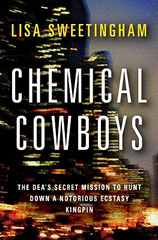 Agents and the men they chase often have the same start in life. They are creative problem solvers, natural leaders with street smarts and an ability to anticipate their adversary’s next ten movies. Somewhere along the way, guys like Gagne choose the law, and guys like Solomon choose crime. Gagne understood that there is a fine line between them, and he believed deeply in sticking to his side of the line. [pg 8]

Journalist and author Lisa Sweetingham takes the readers behind the scenes of the investigations into major Ecstasy rings, while following the career of Special Agent Robert Gagne. For many years, Ecstasy was not taken all that seriously. It was "kiddie dope". Special Agent Gagne with the Drug Enforcement Agency (DEA) would play an integral part in changing that. Gagne was passionate about his work and wanted to make a difference. While most DEA investigations were focused on cocaine and heroin in and around 1995, he was hoping to go in a different direction, go after a lesser known drug. A call from an informant who was given a sample of Ecstasy by two Israeli Nationals was just the break he needed.

Ecstasy got its start as a psychotropic drug and was quite popular for couple's counseling during the 1970's and 1980's. It’s official name is 3, 4-Methylenedioxymethamphetamine (MDMA). It earned the name "Empathy" because of the effects it had on users, including a feeling of euphoria and heightened sensitivity; however later came to be called Ecstasy. In 1988, MDMA became a Schedule 1 Drug, determined to be highly addictive and with no real medical purpose. The effects of the drug diminish with each use, causing users to use more and more to gain the same results as when they begin taking it. The side effects and consequences of using Ecstasy, especially long-term use, can lead to permanent brain damage and even death.

While very popular among young adults, Ecstasy knows no boundaries. It holds appeal to a wide spectrum of people from all walks of life. As the drug grew in popularity and there was a greater demand for the drug, it became all the more challenging for law enforcement officials to crack down on it. When one person in the Ecstasy chain was arrested or disappeared, another was immediately ready to take that person’s place. The Ecstasy business was ever changing and growing rapidly.

The book opens with a stakeout in Los Angeles in November of 1999. DEA agents followed their suspects and watched as they abandoned a SUV. Suspecting it was a trick set up by the suspects to make sure they were not being watched, the agents laid in wait, keeping an eye on the vehicle for days. Eventually, they made a move on the vehicle and discovered the body of a man linked to the Israeli mafia. There were obvious signs of his having been murdered. Suddenly, the stakes had risen and it was not just about the drugs anymore.

In 1973, President Nixon's declaration of war on drugs led to the establishment of the DEA. In the early years, the DEA went after anyone they could get, and that often meant the little guys. Today, they go for those higher up in the hierarchy. They want to suppliers and the cartel heads. It was no different for Special Agent Gagne and his partner, Special Agent Germanoski. The agents began by investigating two low level Israeli drug dealers in New York in 1995 and worked their way up from there. They infiltrated the nightclub scene, posing as gay ravers, in an effort to bring down Peter Gatien, a well-connected nightclub owner who they believed was a major player behind the scenes of the Ecstasy trade. Unfortunately, the jury found him not guilty despite the damaging evidence against him. Special Agent Gagne was not so willing to let it go, and, as a result, suffered a blow when he is assigned a desk job, his maverick style finally catching up with him. However, that did not stop him from doing what he could to stay involved with the Ecstasy scene.

In 1995, when Gagne and Germanoski began their investigation into Ecstasy sales, the drug was barely a blip on the map. As time went on and the demand for the drug grew, other agencies across the globe began to take notice. The problem was so widespread that it did not take long before law enforcement agencies around the world joined forces to tackle the growing problem. The effort was lead by Gadi Eshed with the Israeli National Police. Once the various law enforcement agencies came together, their jobs suddenly became a lot easier. The tangled web of the Ecstasy underworld, at least that under investigation, was beginning to be unraveled.

The drug was being imported into the United States from Holland. Israeli Nationals played a large part in the organization and distribution of Ecstasy during the 1980’s, 1990’s and early 2000’s. It was even tempting enough for the Israeli mafia to take up. The three countries, working with other countries across Europe, were able to put a major dent in the Ecstasy trade.

While Special Agent Gagne plays a large part in Lisa Sweetingham's book, he is not the only major player, nor even the most important. The bringing down of a major Ecstasy kingpin, Oded Tuito, and many others tied to the industry was the result of the hard work of many. While jurisdictional issues occasionally came into play, for the most part the various law enforcement agencies involved worked together for their common cause. They relied heavily on confidential sources, such as informants. In fact, many of their leads come from those on the inside.

It will come as no surprise that I am a fan of crime fiction, especially mysteries. I am fascinated by the investigative process, the discovery of clues that lead to another and another and how it all comes together in the end. True life investigations are even more fascinating in many ways. You may not be able to get into the characters' heads quite the way you can in fiction (which is one of the aspects I especially find appealing in reading fiction), but you can get a glimpse at how crimes are really solved and of our legal system at work.

I have a new found respect for the hard work and dedication of those investigating drug crime rings and just what they are up against. They have an immense amount of patience, that's for sure, and their job requires meticulous attention to details. I am glad to have people like Special Agent Gagne and Commander Gadi Eshed on the job. They both take their jobs very seriously and it shows in their work product—and in their personal lives.

There are a lot of players mentioned in this book, both criminals and authorities. Usually I do not have trouble keeping several characters straight while reading, but in this case, it proved to be a bit of a challenge. Fortunately, Sweetingham did try and help, reminding the reader of the link between one person and another without being repetitive; however, I would not have minded having an organizational chart to help me keep it all straight. Especially one or two involving the various criminal groups.

I never know quite how to review a nonfiction book. While the events covered in the pages of Chemical Cowboys are factual and a matter of record, I do not want to spoil the book just the same. I will not go so far as to say the book reads like fiction, but I will say that it flows smoothly and the author has done a good job in presenting the information she has gathered. Is the book suspenseful? Yes. Informative? Absolutely. Did I enjoy it? Very much. Chemical Cowboys was without a dull moment. Sweetingham kept me interested from the very first page through to the last.

With both the law enforcement officers, the criminals and those who fall somewhere in between, the author presented them as the human beings they are, with their strengths and vulnerabilities. At times she talked about their families and their hopes and dreams, along with their failures. The people described in the book are more than just names on a page. Lisa Sweetingham saw to that.

While the efforts of the DEA and their allies had a major impact on the Ecstasy trade, the distribution and abuse of the drug continues still today. There are new criminals in place to do the dirty work, and law enforcement agencies all over the world continue to do what they can to make our streets safer.

Be sure and check out the author's website. If you would like to follow Lisa Sweetingham's book tour in progress, visit the Pump Up Your Book Promotion Virtual Book Tours blog.

Thank you to Dorothy of Pump Up Your Book Promotion and the author, Lisa Sweetingham, for the opportunity to participate in this book tour.