Review: The Weight of a Mustard Seed by Wendell Steavenson 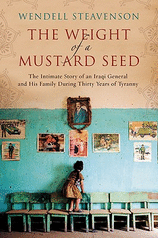 But in Iraq, there was never one story, there were always many stories, layers of episodes, each one a wound. [pg 6]

The Weight of a Mustard Seed: The Intimate Story of an Iraqi General and His Family During Thirty Years of Tyranny by Wendell Steavenson
HarperCollins, 2009 (ARE)
Nonfiction; 288 pgs


I am having the hardest time thinking of something to say about The Weight of a Mustard Seed. I am just plain stuck. I liked the book, some parts more than others. I thought it was relevant to the times, informative, and thought provoking. I have read a handful of reviews in which this book is described as reading like a novel, but I cannot say that proved true for me. It definitely read like a nonfiction book—and not at all in a bad way. It certainly lends credibility to the author’s research and efforts in putting together and writing this book.

Author and journalist Wendell Steavenson spent many years researching her story, interviewing various sources, reading through documents, and living in the country she wrote about. In part, she wanted to know why: why reputable people like General Kamel Sachet would remain loyal to a government regime that he did not agree with, one that, at times, was oppressive, practiced torture and executed people for believing differently or speaking out, including his own followers and supporters.

Although the author sets out to tell the story of General Kamel Sachet and his family, there are many stories within the novel about individuals, some powerful and some with no power at all, sharing their experiences. The book spans over several years, marking much of Saddam Hussein's reign over Iraq. While the focus of the book is on the negative impact of Saddam Hussein’s rule over Iraq, the author does make mention of some of the positives as well, however briefly.

The people, including those in high positions, had to adapt as best they could to survive, sometimes compromising their own beliefs, whether through denial or looking the other way. They rationalized their actions or lack thereof. The author points out the difference in cultures and beliefs between the West and the Middle East through the words of those she interviews. Wendell Steavenson also uses science to seek answers to her questions, looking into psychological studies conducted in the United States. The scientific results are not all that different from what happened in real life Iraq, demonstrating that man, when placed in extreme situations, is not so different even countries and cultures apart.

The Weight of a Mustard Seed provides no real new insights into those age old questions, "Why did you go along with what you knew was wrong? Why didn't you speak out when so many of you disagreed? Why didn't you do something to stop it?" However, what the book does offer is insight into a people and country that have been in turmoil for many years. It shows the strength and resilience of individuals who do what they feel they must to survive. Unfortunately, some do turn to extremism as a way to survive, and it really is no wonder considering the life they have known, the constant fear they live in. There are many though who do not go that route, and who instead are trying their best to get by and hoping for a better day, one free of occupation and oppression, one where they can walk down the street without fear.

General Kamel Sachet did, in fact, speak out, on occasion, although he suffered the consequences as a result. General Kamel Sachet has been compared to Field Marshal Rommel, one of Germany's top generals during World War II. Both men cared about the men they lead and felt a loyalty to the countries they served. They were respected by their peers and those who served below them. Not knowing enough about either, I do not know if that is a fair comparison. I did come to respect him through the author's research and presentation of him in her book. I also appreciated the effort she took in giving the reader a glimpse at the man's family and the impact he had on their lives, both the good and the bad.

The Weight of a Mustard Seed is not my usual type of reading material, but the subject matter interested me, and I am glad I took the time to read it. I don't feel like I did the book justice in all that it covered, but I wanted to at least share some of my thoughts about what I read.