I have done my best to keep each of these reviews spoiler free (unless you count a little synopsis as a spoiler), despite the fact that this is an ongoing series. While each of the books in this series can be read as a stand alone, the background stories are overreaching and quite revealing. The two most recent books published have a tiny hint of a cliff hanger at the end, promising more trouble to come. I recommend the reader read them in order if possible.

The series begins with Kitty and The Midnight Hour, which I read before my blogging days. Kitty Goes to Washington followed close on its heels (click on the title for my review). The following are my thoughts on the next four books in the series. 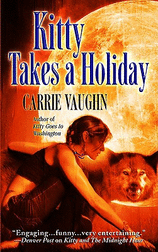 Ever since striking out on her own after being exiled from her pack in Denver, Kitty, the country's most famous werewolf and radio talk show host, has had it rough. Her trip to Washington only added to her now complicated life. She wants nothing more than to spend some quiet time alone and work on her memoir. A cabin in rural Colorado is the perfect getaway--or so she believes until strange things begin happening around her. A dead rabbit is left on her porch long with a cross painted on her door in blood. An evil lurks outside her door, one she cannot quite identify. With the police wanting to pin recent animal deaths in the area on her, Kitty must figure out what is going on. Old friend Cormac, the werewolf bounty hunter, and her attorney, Ben, are more than willing to help, although they come with their own baggage.

Amidst all of that, Kitty takes in a newly turned werewolf and has to reach inside herself to find the strength to be the alpha, a role completely opposite the one she was in at the beginning of Kitty and the Midnight Hour. Kitty is an amazingly strong woman, however, she doesn't quite realize that. Remnants from her abusive past have left their scars and will carry over into the next book in the series as well. At times, she lets her fears get the better of her, but she always manages to come through in the end.

Kitty Takes a Holiday is not quite as fast paced as the other novels in the series, but it does allow the character time to process much of what has been happening to her over the past few months, which I think adds a hint of realism to this urban fantasy series—grounding it in a sense. This particular book carries a number of different story threads, some intersecting better than others. It feels like a transitional book. I enjoyed it quite a bit, but felt there were a couple of minor loose ends that should have been resolved. Perhaps I have that to look forward to in future books! 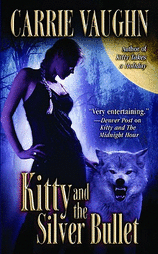 I was more than ready to dive into Carrie Vaughn's next Kitty Norville book after finishing Kitty Takes a Holiday. The mood was right and I was not quite ready to say goodbye to the characters just yet, however temporary. I wasn't disappointed.

Kitty and her new mate have settled in Pueblo, Colorado, far enough away from Denver not to cause problems, but close enough to continue with her radio show at KNOB. Her talk show is one of a kind. She reaches out to supernatural beings and others who want to learn more about them. When her mother is diagnosed with cancer, Kitty rushes home to Denver and finds herself in the middle of a power struggle between two powerful vampires. Despite her best intentions to stay neutral, Kitty is forced to choose sides. Her former pack leader wants her dead and will not rest until she is. With the werewolves and vampires on the brink of war and a powerful werewolf out for her blood, Denver is not the safest place to be--not even with the new supernatural police unit lead by Detective Hardin on the case.

I really enjoyed this book. It was fun and entertaining. Kitty is coming into her own as an alpha wolf, still struggling with her former life and her new one. She is not a violent person and would prefer to talk things out, but even she realizes that the ideal is often not the reality. Kitty must make some very difficult decisions, and she isn't quite sure she is up to being the one to make them. Her insecurities come to the forefront in this novel.

I am still not quite sure how I feel about her love interest. I like him very much as a character, and perhaps my hesitation to fully accept them as a couple comes from the fact that I am not sure the sparks between she and another man from her past have fully had a chance to die out. Still, her current relationship makes more sense for practical purposes, and I do hope they will be happy together.

One of many things I like about Carrie Vaughn's series is that it is dark and a bit on the gritty side, while at the same time remaining easy reading. Carrie Vaughn is one of my comfort authors. 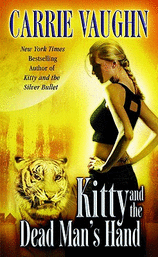 Kitty heads out of town again, this time for Las Vegas. She somehow was talked into hosting a live television special in the City of Sin and in delivering a message from Denver’s Master Vampire to the one in Las Vegas. Add to that a wedding, a poker tournament and mobsters; what could be more fitting for the setting of this novel?

Kitty is booked into the same hotel that is hosting a gun show and some of the conference goers are not too keen on her kind. It does not take much to make an enemy of someone who already has it in for you. Where Kitty goes, you can be sure magic and danger will be close behind, and sure enough, Kitty and the Dead Man’s Hand has some of both. Las Vegas is the home of many secrets and Kitty quickly finds herself tangled up in the middle of several.

Although I liked Kitty and the Dead Man’s Hand, it got off to a slow start. Considering the characters that needed to be introduced for the set up of the various plot threads, including the main one, it probably could not have been done any other way. In addition, I wish the author had gone a little farther with certain threads in the novel, but perhaps that was in part due to the limitations of a first person narrative.

Something I really liked about Kitty in this book is how she used her cell phone to warn her friends when she was about to jump into trouble. Sure, she didn’t stay put like she promised and ran head first into trouble all by herself. But at least she reached out for help, even if a little later than she should have.

One of the strongest things Kitty has going for her are her friends and how they will stand by her during the worst of moments. Kitty may not be able to tackle the biggest evil in the world on her own, but she is a team player—most of the time—and she is not afraid to stand up for herself no matter how afraid she might be.

Carrie Vaughn has created an interesting storyline which holds a lot of promise in developing further in future books. Although this was not my favorite book in the series, Kitty and her friends continue to keep me entertained and interested in their adventures. 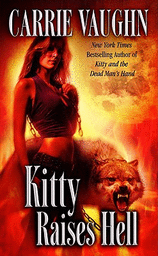 
Trouble seems to follow Kitty no matter where she goes, and it certainly has found her in Denver. Something is stalking her and threatening her pack. She is up against a supernatural force she cannot explain, much less name. Seeking help from the crew of a televised paranormal investigation show, maybe she will be able to figure out who or what is behind the strange happenings and learn how to stop it before it wrecks even more havoc than it has already.

She also is offered help from another source; a mysterious vampire offers his services but for a price. His price is high and both the Master Vampire of Denver and Kitty are unsure they can trust the man who says he is the only one who can stop the foe they are up against. As danger draws closer takes the life of someone close to her, Kitty is desperate and willing to try anything to save her friends and family.

I am beginning to see a pattern with the Kitty Norville books. I appear to like the novels that take place in Denver best (although I really liked Kitty Goes to Washington too). Kitty seems more settled in this book, although not completely. Her position in the pack is somewhat tenuous, especially with an evil after her that she knows so little about.

Carrie Vaughn continues to add new and interesting characters to the series as well as bring back old ones that I am eager to learn more about. The longer the series goes on, the more I like the character of vampire Rick. Kitty has a good ally in him even though they do not always see eye to eye. And I was pleased to see Odysseus Grant reappear—there’s still so much to learn about him!

Kitty Raises Hell is a great addition to the series. It was different and fun. I look forward to meeting up with Kitty and friends again in the near future.

Many thanks to Miriam from Hachette for providing me with a copy of Kitty Raises Hell.

Be sure and stop in and visit the author's website!