Monday At the Movies: Soundtracks & Twilight

The Monday Movie Meme is brought to you by The Bumbles.

This week's movie topic is all about Soundtracks . . .

We watched Dog Day Afternoon a few weekends ago and it dawned on me as we watched that other than Elton John's "Amoreena" in the opening scene, there is not another note of music during the entire film. Not much of a soundtrack opportunity there. Typically, music plays such an important role in movies. Itzhak Perlman's haunting violin lives in the background of Schindler's List seamlessly setting the tone, whereas the ominous notes in Jaws jump right out to signal the villian. Songs carefully chosen for their lyrics or their tone can boost a scene too. These days, it seems the songs off of the soundtrack albums are more successful than the movies they appear in. Here are some of our favorite soundtrack albums - and we happen to think the movies were pretty entertaining too. What about you?

There was a time when I bought the soundtrack to every movie I saw. Well, just about. I love music. And movies. The combination together can be breathtaking when the right music is added to the right movie.

Some of my favorite soundtracks include (I am limiting it to 10 because my list could go on forever):

Monday's Movie hosted by Sheri at A Novel Menagerie
My husband and I cuddled on the couch Friday night and watched Twilight, which came out last week on DVD. My Harry Potter/Twilight fanatic friend was getting on my case just about every day, wondering when I was going to watch it. It was my husband's second time seeing the movie and my third.

For your sake, I am going to skip reviewing it again. One review is enough. I enjoyed watching it again and my impressions of the movie haven't really changed all that much. The sparkly forest scene--if you've read the books or seen the movie, you know what I mean--actually didn't look nearly as ridiculous on my television set as it did on the silver screen. My husband said it had to do with the resolution. It's not the greatest movie. Call it a guilty pleasure, if you will. There's just something that keeps me wanting to come back to it. I am really curious to see how New Moon turns out come winter. 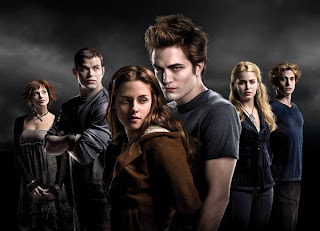