Review: The Tales of Beedle the Bard (and Friday Fill-Ins) 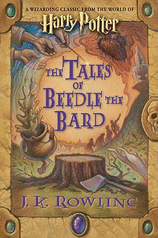 The Tales of Beedle the Bard by J.K. Rowling is a delightful story book full of magical fairytales straight out of the Harry Potter world. Translated by Hermione Granger with comments by Albus Dumbledore, this collection of five stories is a perfect addition to an already wonderful series. Readers are introduced to the tales told to young wizards and witches, each one carrying important lessons that even young muggles will benefit from.

There is the story about the ungrateful and selfish son of a wizard who does not share his father’s generous and kind spirit. The young wizard soon discovers that a gift left behind by his late father proves to be more than it seems. In another tale, a prideful warlock who wanted nothing to do with love suddenly decides to uncover his cold heart, but at what price? Then there is the envious king seeking magic all for himself at the cost of the lives of the witches and wizards in his kingdom. Will his greed and ignorance prove to be his downfall? My favorite tale of the bunch is about three witches and a knight, each seeking resolution to their greatest problems by climbing a hill to reach a fountain that promises them just that. The only catch? Only one of them will be able to soak in the Fountain of Fair Fortune, which will grant one of them his or her wish. Perhaps the most famous of the stories is the one of The Tale of the Three Brothers, which makes an appearance in the Harry Potter series. It proved to be a telling tale and in its original incarnation.. The three brothers cheat death, and Death grants them each one gift of their choice, hoping to ensnare them yet again.

The best part of this little book of stories is not the tales themselves, but Dumbledore’s commentary. He offers his own interpretation of each one along with the stories’ histories and how they have been perceived over the ages. His comments are both meaningful and hilarious. I found myself giggling quite often.

The Tales of Beedle the Bard is a fun and entertaining collection of stories. If you are a Harry Potter fan, you don’t want to miss this one!

1. The world is getting awfully heavy for Atlas.

3. I wonder why the fire hydrant outside attracts front bumpers.

4. My nose will be buried in a book at the end of all things.

5. There's something to be said for wearing socks on a cold day.

6. At home with my husband and furkids is where I want to be.

7. And as for the weekend, tonight I'm looking forward to snuggling under the warm covers and getting a good night's sleep; tomorrow my plans include sleeping in (if the animals let me) and taking my husband out on a date for lunch and a movie; and Sunday, I want to curl up on the couch and spend hours lost in a book!