A Double Feature: The Reader and Valkyrie (Movie Talk)

So, I am a little late with this one. Pretend it is Monday, only let's make it so I don't have to actually work through the entire day again as if it were, okay? In fact, maybe by the end of this post it will be Thursday evening, time for my weekend to begin. Wishful thinking, I know. Anyway, this is all Sheri's idea. She hosts Monday's Movie over at A Novel Menagerie each Monday. Hopefully she will forgive me for being tardy with this post.

If movies counted toward the War Through the Generations Challenge, I would have been able to knock two off my list. One Saturday earlier this month, my husband and I took in a double feature. It was more for my benefit than his, although recent reviews were enough to get him at least a little curious. Therefore, I did not have to twist his arm too hard.

Let me say here that as much as I love movies, I cannot review them. I sat down many times to write down my general impressions of the films and ended up deleting each and every attempt. I don’t know why I have such difficulty with it, I just do. I’ll give it one final try, and you and I will just have to live with the results.

Having really liked and been moved by Bernhard Schlink’s novel, The Reader, when I read it years ago, I was eager to see it come to life on the silver screen. It helped that one of my favorite actors, Ralph Fiennes, played one of the leads.

My Thoughts: The Reader as a book was my first real exposure to the turmoil Germany and its citizenry faced in the years after the Second World War. And really, not just Germany, but all those who were under German control at the time. How did the average person reconcile what was done in the name of the Nazi party, whether that person was involved with the war effort or not?

The movie version of the book was amazing on many levels. The performances by all of the characters, especially that of Kate Winslet, Robert Kross and Ralph Fiennes, were exquisite. The setting felt real and true. It has been years since I read the book and so I cannot account for accuracy, I am afraid. I came to care for the characters, particularly Michael’s character.

Kate Winslet played the role of Hanna Schmitz, and she couldn’t have done a better job. She was guarded and came across as cold at times, and yet somehow vulnerable. Her inability to read was a badge of shame for her and she had learned to hide it well over the years. I felt pity for her at times, but not enough to ever really like her or excuse her for what she’d done. What I did take away from her character was how ordinary she was. And how ordinary people were among those who committed some of the most horrific crimes. We all would like to think that we would have acted differently in the same situation. Maybe we would have. I want to believe that I would have. It’s something to think about, regardless.

The story had the promise of being powerful and yet somehow was underwhelming when all was said and done. My husband suggested that it may be a result of Michael’s passive role throughout the movie—as a main character, he took very little action in the film; rather, he took a back seat as events unfolded around him. I am not sure if that was it for me as well, only that I felt something was missing from the film. I wish I could put my finger on it. It was a beautiful film, and oh so terribly sad. 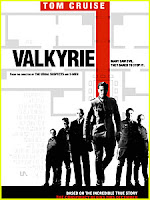 I like Tom Cruise in most of the roles he undertakes but sometimes it can be hard to separate the actor from the public image that has been out there in the media in recent years. That image has not been very favorable. Still, I was eager to see Valkyrie, a movie set during the Second World War, a time in the world’s history that draws me like a magnet.

Brief Summary: Tom Cruise plays Colonel Claus von Stauffenberg, the man to plan and initiate the final attempt on the Fuhrer’s life. He is disillusioned with his country’s leadership and fears that if things continue as they have been, it will be the downfall of his beloved country. He is willing to risk being labeled a traitor in order to do what he feels in his heart is the right thing. After being injured in a battle in North Africa, he is enlisted in a plot to assassinate Hitler and overthrow the government. His efforts are not easy, conflicts arise and even the best laid plans can go awry.

My Thoughts: I was drawn into the movie and, even knowing how the story would end, I found myself wishing for a different outcome. My only complaint? The accents. The German officers in the movie had a number of accents, including American and British. It didn’t in any way ruin the film for me, but I did find it amusing. Still, all in all it was an entertaining and powerful film.