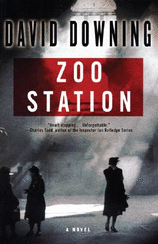 There were two hours left of 1938. [First Sentence]

Reason for Reading: I liked the sound of this book, not to mention the time period appealed to me.

Comments: Set in 1939 Germany, Zoo Station is a novel of intrigue and suspense. Germany is in a powerful position, the threat of war is in the air and the rest of the world is waiting anxiously to see what direction Adolf Hitler will take the country next. The government has taken control of many facets of German life, controlling the media, dealing swiftly with those who might disagree or cause trouble for the Fuhrer’s plans, and persecuting the Jews and other people who do not fit into the acceptable norm established by the Nazi party. The atmosphere in Germany is tense.

Journalist John Russell has been around the block. His goal at this point is to stay in Germany as long as he can in order to be close to his son and his German girlfriend. With Hitler’s regime tightening its hold on the media and information being allowed out of the country, John Russell must make a difficult decision. A former active communist, born to a British father and an American mother, Russell soon discovers that he is in a convenient position; convenient, that is, to the British and Soviet governments. Both sides know he has no love for the Hitler regime and understand his reasons for wanting to stay in Germany for as long as he can. Russell would make a great covert agent, a source of information. Needing to stay on the Nazi’s good side in order to stay in the country and keep his journalist accreditations while at the same time not being able to sit by without doing something to right the injustices he encounters, however, small, Russell finds the idea of being an informant very tempting. And it could prove useful for his own purposes.

John Russell is a man of integrity. He walks a thin line throughout the novel, appeasing the Nazis so as not to compromise his position and risk losing his family. He worries that he is compromising his own values, but then would he have been in a position to help those he was able to reach out to? It’s a difficult dilemma. John Russell is an admirable character, flawed, and yet someone who the reader can easily cheer for.

Author David Downing notes at the beginning of the book that he aimed for historical accuracy, and it comes through in his writing. He weaves history with the plot and characters seamlessly, whether it is the plot by the government to kill the mentally ill children or rid the country of its Jewish population, stripping them of their rights, forcing them to live in poverty, beating them, imprisoning them, and accusing them of false crimes in order to persecute them even further. The historical setting and true life situations only add to the suspense of the novel, creating an added tension to events as they unfold.

Zoo Station is a powerful and compelling novel. Set in the pre-World War II era, readers are taken deep into the heart of Germany during a pivotal moment in history and are treated to an entertaining and yet thought provoking novel. Fortunately for readers, author David Downing has more in store for John Russell.

Originally published on Curled Up With A Good Book at www.curledup.com. © Wendy Runyon, 2009.