Please join me in welcoming Jan Brogan, author of the Hallie Ahern, investigative reporter, series! Her most recent book, Teaser, was released just this past month in stores. The author offers a glimpse into Hallie Ahern's growth as a character.

Be sure and come back tomorrow for my review of Teaser.

Many thanks to Jan for taking the time to stop in and visit! 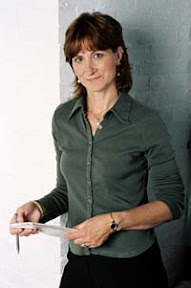 Sometimes, a character talks to you. And after I wrote Yesterday’s Fatal, my protagonist, Hallie Ahern, spoke up.
“I need to grow up, a little,” she said.

Hallie is thirty-five years old --a grown up by any account -- but she’s also a newspaper reporter, and newspaper reporters tend to be single-minded. Anyone can tell you that newsroom dynamics are awful lot like high school.

So I wasn’t sure I wanted Hallie to grow up. I like inner conflict in a character and her insecurities not only drive her to take some heart-pumping risks, they also provide for a lot of entertaining subplots.

But Hallie is my main character, and after three books, she had rights. And Teaser offered the perfect opportunity.

That’s because Teaser is about teenagers. What better way to confront your own immaturity than by having to cope with the inner demons of teenage girls?

I forgot to mention that Hallie is in recovery for a gambling addiction she developed in A Confidential Source. Now, struggling to keep herself away from online poker, she’s spending a little too much time on her social networking site. There, she stumbles on a provocative video of two teenager girls on a beach blanket. Recognizing a high school sweatshirt in the background, she realizes that the girls are local.

Hallie convinces one of the girls to meet her and soon has material for a front page exposes on teenage girls and webcams. But when those girls start disappearing, Hallie’s story becomes a mission.

The bad guys aren’t Hallie’s only problem. Her newspaper pulls its support of her investigation when it begins to conflict with the failing paper’s online business plan. And when the trail takes her to Newport, Rhode Island, she has to decide between pursing the story or upholding her promise to her boyfriend, prosecutor Matt Cavanaugh, who has asked her not to cover stories that conflict with his own investigations.

Ultimately, she has to look beyond herself into a heart of a teenager. The sadness she sees makes her question her own motives and decide what is most important in life.

* * *
Jan Brogan is a published author as well as a part-time journalist for The Boston Globe and as a freelance magazine writer. Visit the author's website for a peek at the first chapter of Teaser and to learn more about the author. You can also find the author at the Jungle Red blog.