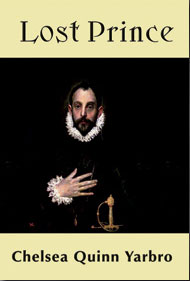 First Sentence: Oh the flames were glorious, competing with the splendor of the sunset as it faded over Valladolid.

The Spanish Inquisition was a dark time in Spain’s history. Religious persecution for those who were not Catholic was common practice during that time and the monarchy and Church leadership were intolerant of any deviation from their strictures. Originally written in 1983 under the title, The Godforsaken, Chelsea Quinn Yarbro’s tale of the Lost Prince is completely fictional, however, there are threads of truth that run through the novel that are more horrific than the horror story she sets out to tell.

Don Rolon carries the burden of his father’s curse, a curse that was laid upon El Rey Alonzo, the king of Espana, by a woman burned at the stake for being a heretic. The king ostracized his son, fearing the curse and feeling repulsed by it. Don Rolon spent his life living in the shadow of his bastard half brother, Gil, who was highly favored by the king. It is no wonder then that Don Rolon has a sadness about him. He wants nothing more than to please his father and earn his love and approval, and yet his father wants little to do with him.

Realizing, however, that his son is the only rightful heir to the throne, El Rey arranges for Don Rolon’s marriage to a noble woman from Venezia. The marriage will create a welcome alliance and strengthen both countries’ positions in the world. It is with great reluctance that Don Rolon agrees to his fate, knowing he has little choice in the matter.

His reluctance to marry comes from the weight of the curse. He worries about fate of any children he might father as well as a certain madness that seems to befall him each time the moon is full. Although he does not fully understand what is happening to him at first, he does know that a change overcomes him on those nights, one that transforms him into a beast that wrecks destruction and creates fear in its wake.

Don Rolon is limited in who he can trust and so his friends are few. The friends he does have are devoted to him and will do what they can to protect and keep their prince safe from those who wish him harm. Those who are greedy and power hungry are the greatest external threat to Don Rolon and they will stop at nothing to bring him down.

Don Rolon is a sympathetic character; a lost soul who has taken many licks throughout his brief lifetime. There is a wary intelligence about him. He is resigned to his life and his fate, struggling to come to terms with what is going on around him. It is his friends who truly move the story forward as they do what they can to protect their friend and future king. The court jester, Lugantes, is one such friend, a dwarf who knows what it is like not to be taken seriously. He is both clever and tough.

The religious tenor in Spain at the time was oppressive and strict. The church leadership in the novel used their position to gain power, claiming righteousness where there really was only ambition and greed. The real horrors were in the actions of the Church and the abuse of that power. Lest it be thought that this book disparages the Catholic Church in general, that is not so. There were Catholic monks and priests in the novel who were not caught up in the power struggle and who did not abuse their power.

Chelsea Quinn Yarbro is careful to keep most of the violence and destruction off of the page, while at the same time alluding to it in such a way that it cannot be overlooked. Perhaps though the greatest horrors in the novel are not what may happen when Don Rolon is no longer himself, but the ease in which accusations and condemnations of those in power are used against those without it and in what becomes of those accused.

It is a shame this book was so wrought with typographical errors and the like. The story itself is quite intriguing. The author is formal in her writing, but it serves the tone and setting of the book well. Lost Prince is a haunting and dark tale, one that kept me entranced even beyond the last page. Originally published at Front Street Reviews.
Rating: