The Rest Falls Away by Colleen Gleason 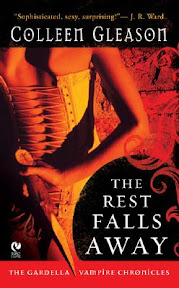 
First Sentence: His footsteps were soundless, but Victoria felt him moving.

Reason for Reading: I first saw mention of this book in the blogsphere and became curious about it. After reading an interview with the author on Carl V’s Stainless Steel Droppings decided reading it was a must. The Spring Reading Thing gave me the perfect excuse to finally get around to reading it, something I’d intended to back at the beginning of the year.

From the Publisher: In every generation, a Gardella is called to accept the family legacy of vampire slaying, and this time, Victoria Gardella Grantworth is chosen, on the eve of her debut, to carry the stake. But as she moves between the crush of ballrooms and dangerous, moonlit streets, Victoria's heart is torn between London's most eligible bachelor, the Marquess of Rockley, and her enigmatic ally, Sebastian Vioget. And when she comes face to face with the most powerful vampire in history, Victoria must ultimately make the choice between duty and love.

Comments: The growth of this particular genre, specifically paranormal romance novels involving vampires, appears to have taken the industry by storm. Audiences are eating them up at an alarming rate. To a small extent, I too have jumped on the bandwagon. I have my favorites, I admit, and stick pretty close to them. I venture out occasionally but not always with success. And so, although I was eager to try the first of Colleen Gleason's Gardella Vampire Chronicles, a tiny part of me was worried. And yet, you wonder, with so many positive reviews by respected bloggers,how could I go wrong? In this case, I lucked out.

The Rest Falls Away is the first in what has started out as a promising series set in Regency London about a vampire slayer. Victoria Gardella Grantworth is one of the chosen, a Venator, destined to hunt vampires and ward off the evil they bring. While the idea is not a new one, Victoria herself is a charming leading lady whose adventures are bound to attract fans of the genre. She is independent, stubborn and a quick study. The men in her life are no less intriguing, each of them seductive in their own way.

As a reader who prefers more action to romance, I was relieved to see that the author found a balance between the two. Although the love story was a major component in the novel, it did not overwhelm the story.

Overall, The Rest Falls Away was an entertaining reading experience. I look forward to watching the characters in the series evolve and seeing where Colleen Gleason takes us in the next installment.

Favorite Part: I’m not much of a fashion-oriented person, but I have to say that I was quite taken with the creative ways in which Verbena made up Victoria’s hair to hid the stacks and in her design for Victoria’s fighting dress. Verbena reminded me a lot of Charlotte Pitt’s maid from one of Anne Perry’s mystery series, who is always ready to assist her mistress when there is a mystery to be solved.

Of the characters, I am most curious about Max. I normally do not care for brooding macho men, but there’s something about Max that draws me in.

A Must See: Colleen Gleason's blog

Miscellaneous: I am home at last and back in front of my computer. I am happy to say that I did not got into withdrawals at not having access to a computer for a the last few days. Still, it is good to be back. Now to catch up!

The conference in San Francisco was good. I came away satisfied and have some great ideas to share with my colleagues. The downside of the trip (there always is one when it comes to trips I take), is that my luggage, along with that of about half of the passengers on the plane, got left in San Francisco. Evidently a conveyor belt of some sort broke and no one noticed. The airline has said that our luggage will be delivered tonight right to our doorstep. Let’s hope so!
Posted by Literary Feline at 5/06/2007 08:55:00 PM