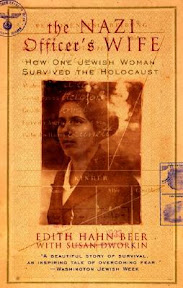 
First Sentence: After a while, there were no more onions.

Reason for Reading: This was my first selection for Joy's Nonfiction Five Challenge, and my sixth selection for the Spring Reading Thing.

Comments: It is impossible to put into words the emotions a person may feel when reading a book like this--that nightmares as terrible as those experienced by the Jewish people and other targeted groups in Europe during the Holocaust could be real. The most frightening part is that they are very real. What makes it even more sad is that the world’s people have not learned the lessons taught from that experience. Violence, persecution, oppression and genocide continue to this day. The only things that have changed are the faces and names of the victims.

The Nazi Officer’s Wife is a different kind of story from the usual Holocaust Survivor story. Edith never faced the horrors of the concentration camps perhaps, but she faced other hardships and horrors that cannot be discounted. Edith and her family led a good life in Vienna before the Jewish persecution began. She was one exam away from achieving her academic goal and she was in love. Up to that point, the political climate in Vienna had slowly begun to change. During those early years there was an undercurrent of fear of what was to come, but many people doubted it would last and never imagined the horrors that would await them. The war on the horizon would be quickly quashed, surely. But that was not to be.

Piece by piece the Jews were striped of their livelihoods, their property and possessions, and their identities. It was a process of dehumanization. The spreading of fear and hate through propaganda assured the process would succeed. Edith held on for as long as she could to her life in Vienna. She watched as family and friends fled the country. Her own fate would take her to the fields and a factory where she was forced to labor, in every sense a slave. Food was scarce and the conditions unfathomable. Only seeking to survive and in hopes of escape from the Nazi occupied countries, Edith took to hiding, assuming the identity of an Aryan Christian. She eventually married a member of the Nazi Party. She constantly lived in fear that she would be arrested and sent to a concentration camps. She feared that those who helped her escape and helped hide her, including her husband, would be persecuted as well. It wasn’t until later that Edith would learn the truth about what being sent to Poland meant for her friends and family. So many like Edith were cut off from any real and honest news reports. They had no idea of the horrors the Nazis’ chosen enemies faced nor the status of the war.

The author made sure to document the times she was helped along the way, whether it is something as simple as a shared food to those who risked their lives to save hers. She wanted to be sure to acknowledge their sacrifices. In many ways it was moments like these that offered a glimmer of hope, however tiny, during such a tragic time in the world’s history.

Edith Hahn Beer captures life before, during and after the war, documenting the difficulties she and others faced, the ignorance and fear that so many at that time lived in. The Nazi Officer’s Wife is a powerful account of one woman’s survival during a turbulent time in our history.

Miscellaneous: I was finishing up my lunch and packing away my book yesterday afternoon before returning to my desk at work, when a man I didn't recognize heading out at the same time asked, "How is that damsel in distress?" When I looked at him blankly, he quickly went on, "And how are the two men she's trying to decide between?" He said something about a husband and a handsome stranger. I gave a little burst of laughter and explained, "Well, I don't know. I'm reading about an ATF agent who is chasing down a gun runner." I wish I had a more witty comeback, but I'm not very quick on my feet in the spur of the moment and the better responses came to mind much later. (My sincere apologies to Jim for simplifying his book in such a way as that isn't a very accurate description. It was all I could think of to say in the moment.)
Posted by Literary Feline at 5/23/2007 06:10:00 PM