Where Is Your Bookmark: An Exiled Goddess & Earthquakes

When I was born, the name for what I was did not exist. [opening of Circe]

The halls would echo with her furious screams and the great gods would come to whip me, but I would welcome them, for every lash upon my skin would be only further proof to Glaucos of my love. [pg 56 of Circe] I am nearly halfway into Madeline Miller's Circe, which I am absolutely loving. Why did I wait so long to pick this one up?!

In the house of Helios, god of the sun and mightiest of the Titans, a daughter is born. But Circe is a strange child - not powerful, like her father, nor viciously alluring like her mother. Turning to the world of mortals for companionship, she discovers that she does possess power - the power of witchcraft, which can transform rivals into monsters and menace the gods themselves.

Threatened, Zeus banishes her to a deserted island, where she hones her occult craft, tames wild beasts and crosses paths with many of the most famous figures in all of mythology, including the Minotaur, Daedalus and his doomed son Icarus, the murderous Medea, and, of course, wily Odysseus.

But there is danger, too, for a woman who stands alone, and Circe unwittingly draws the wrath of both men and gods, ultimately finding herself pitted against one of the most terrifying and vengeful of the Olympians. To protect what she loves most, Circe must summon all her strength and choose, once and for all, whether she belongs with the gods she is born from, or the mortals she has come to love. [Goodreads Summary]

What do you think? Does this sound like something you would enjoy?

Connect Five Friday is a weekly meme where readers share a list of five books,
read or unread, or bookish things, that share a common theme.
Hosted by the  Kathryn of of Book Date.
As I was considering Connect 5 topics for this week, a small earthquake rattled the house and I had my topic! Living in California, earthquakes are somewhat common place. Most of them go unnoticed. I have been through two bigger ones so far in my lifetime: the Loma Prieta earthquake (aka San Francisco earthquake) of 1989 and the Northridge earthquake in 1994. I still remember exactly where I was and how I felt at the time of both. The anniversary of the Northridge quake is coming up next week and got me thinking of books I have read or want to read featuring earthquakes. The first three books are ones I have read while the other two are books I want to read. 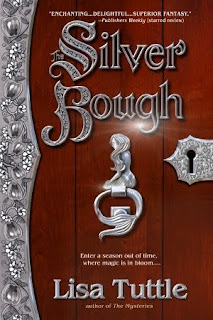 1. Silver Bough by Lisa Tuttle ~ When an earthquake causes a landslide on the only road into and out of town, the visitors and residents of Appleton find themselves cut off from the rest of the world. Suddenly things around Appleton begin to change; myths become reality and the ancient magicks of the area reclaim the land. Ashley, Kathleen, and Nell have front row seats to the events that are about to unfold in the lazy coastal town of Appleton. The fate of the town lies in the destiny of one very special golden apple. 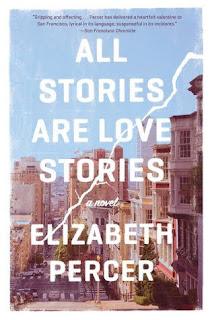 2. All Stories Are Love Stories for Elizabeth Percer ~ This novel takes place just before, during and after two catastrophic earthquakes in San Francisco, sparking fire and devastation. At the novel's center are three characters: Max, a twenty-nine year old who is going through the motions of living, let down by those he loved the most; Vashti, who has made a fresh start after the deaths of her daughter and husband, and who has never stopped loving Max; and Gene, a Stanford geologist who is afraid of losing the one person he loves most in the world. All three of their lives will converge as they face their pasts, come to terms with their present, and do what they can to survive. 3. Smile by Raina Telgemeier  ~ This is a coming of age graphic memoir about navigating middle school, dealing with dental drama, boy confusion, mean girls and living through a major earthquake. My daughter has read this one a million times just about, so of course I had to read it too. 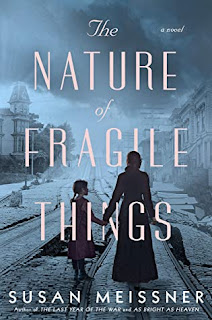 4. The Nature of Fragile Things by Susan Meissner ~ I have not gotten to this one yet, but it is on my TBR pile and is one of my must read books of the year.

Sophie Whalen is a young Irish immigrant so desperate to get out of a New York tenement that she answers a mail-order bride ad and agrees to marry a man she knows nothing about. San Francisco widower Martin Hocking proves to be as aloof as he is mesmerizingly handsome. Sophie quickly develops deep affection for Kat, Martin's silent five-year-old daughter, but Martin's odd behavior leaves her with the uneasy feeling that something about her newfound situation isn't right.

Then one early-spring evening, a stranger at the door sets in motion a transforming chain of events. Sophie discovers hidden ties to two other women. The first, pretty and pregnant, is standing on her doorstep. The second is hundreds of miles away in the American Southwest, grieving the loss of everything she once loved.

The fates of these three women intertwine on the eve of the devastating earthquake, thrusting them onto a perilous journey that will test their resiliency and resolve and, ultimately, their belief that love can overcome fear. [Goodreads Summary] 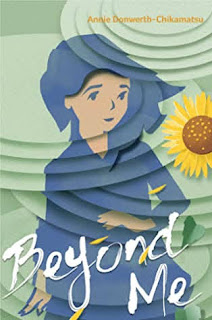 5. Beyond Me by Annie Donwerth-Chikamatsu ~ This is a recent addition to my wish list. I thought it would be a good one for both me and my daughter.

In the spirit of A Place to Belong, this remarkable novel-in-verse examines the aftershocks of the earthquake and tsunami that devastated Japan in 2011 through the eyes of a young girl who learns that even the smallest kindness can make a difference.

March 11, 2011 An earthquake shakes Japan to its core. A tsunami crashes into Japan’s coast. Everything changes.

In the aftermath of the natural disasters that have struck her country, eleven-year-old Maya is luckier than many. Her family didn’t lose their home, their lives, or each other. But Maya still can’t help feeling paralyzed with terror, and each aftershock that ripples out in the days that follow makes her fear all over again that her luck could change in an instant.

As word of the devastation elsewhere grows increasingly grim—tens of thousands have perished—it all seems so huge, so irreparable. Already flinching at every rumble from the earth, Maya’s overcome with a sense of helplessness and hopelessness. How can her country ever recover, and how could anything she does possibly make a difference?

Before Maya can extend a hand to others, she must dig deep to find the hidden well of strength in herself in this sweeping, searing novel that shows even small acts can add something greater and help people and communities heal. [Goodreads Summary]

Have you read any novels featuring earthquakes you would recommend I read?
I hope you all have a wonderful weekend! Be sure and tell me what you are reading and are up to!