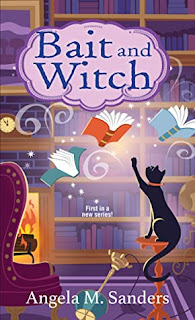 Librarian Josie Way moved to small-town Oregon to lay low. Instead, thanks to newfound magic abilities—and a killer on the loose—she’s leapt out of the frying pan and into a cauldron of trouble . . .

Josie Way loved working among the Library of Congress’s leather-scented stacks—until she uncovered corruption and made herself a target. As Wilfred, Oregon’s new librarian, Josie can stay undercover until the case goes to court. But life in this little town isn’t as subdued as she expected. The library, housed in a a Victorian mansion, is slated to be bulldozed. Still digesting the news that her safe haven is about to become scrap lumber, Josie discovers a body in the woods . . .

Almost as shocking, Josie learns that she’s descended from a long line of witches—and her powers have suddenly sprung to life. With help from a spoiled alley cat who just may be her familiar, Josie’s thumbing through a catalog of suspects, hoping she can conjure a way to save her library—and her life . . . [Goodreads Summary]

Why I want to read this: Paranormal cozies are among my favorite type of mysteries, add to it a library, and I am a very happy reader. This sounds like a great start to a new series. I cannot wait to give it a try.

Does Bait and Witch interest you? What upcoming release are you looking forward to reading? 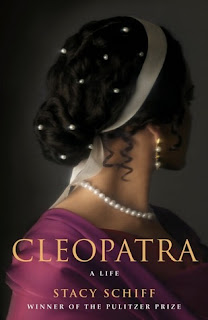 The Pulitzer Prize-winning biographer brings to life the most intriguing woman in the history of the world: Cleopatra, the last queen of Egypt.

Her palace shimmered with onyx, garnets, and gold, but was richer still in political and sexual intrigue. Above all else, Cleopatra was a shrewd strategist and an ingenious negotiator.

Though her life spanned fewer than forty years, it reshaped the contours of the ancient world. She was married twice, each time to a brother. She waged a brutal civil war against the first when both were teenagers. She poisoned the second. Ultimately she dispensed with an ambitious sister as well; incest and assassination were family specialties. Cleopatra appears to have had sex with only two men. They happen, however, to have been Julius Caesar and Mark Antony, among the most prominent Romans of the day. Both were married to other women. Cleopatra had a child with Caesar and–after his murder–three more with his protégé. Already she was the wealthiest ruler in the Mediterranean; the relationship with Antony confirmed her status as the most influential woman of the age. The two would together attempt to forge a new empire, in an alliance that spelled their ends. Cleopatra has lodged herself in our imaginations ever since.

Famous long before she was notorious, Cleopatra has gone down in history for all the wrong reasons. Shakespeare and Shaw put words in her mouth. Michelangelo, Tiepolo, and Elizabeth Taylor put a face to her name. Along the way, Cleopatra’s supple personality and the drama of her circumstances have been lost. In a masterly return to the classical sources, Stacy Schiff here boldly separates fact from fiction to rescue the magnetic queen whose death ushered in a new world order. Rich in detail, epic in scope, Schiff ‘s is a luminous, deeply original reconstruction of a dazzling life.

Why I want to read this: I have always been interested in learning more about Cleopatra, and have heard  great things about Schiff's biography on the woman. I have a beautiful hardcover copy I got when this first came out. Yet another book that sits on my shelf, patiently waiting until I am ready.