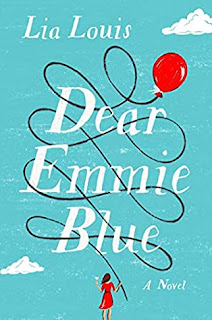 I was ready; so ready for him to ask me. ~ Opening of Dear Emmie Blue
Dear Emmie Blue by Lia Louis
Atria/Emily Bestler, 2020
Fiction/Romance; 320 pgs
Source: NetGalley for an honest review.
I have to say I loved Dear Emmie Blue from the moment I began reading straight to the end. This sweet romance was so much more than I expected--and a bit unexpected to boot. The novel opens with Emmie Blue sick in the bathroom of a restaurant having just learned that the crush of her life is engaged to someone else. And will she be the best woman? Of course, she will, but will it rip her heart out in the process? Sound a bit like My Best Friend's Wedding? Well, it's not.
When Emmie was sixteen she was feeling lost and alone when she released that balloon with a message into the sky over England. Little did she know, it would be caught by a boy her age in France. The two became fast friends, sharing their hopes and dreams and worst fears. Fourteen years of friendship, and the two are the best of friends.
Emmie has long loved Lucas but been afraid to tell him. His life seems so together while hers seems to be going nowhere. Her relationship with her mother is in tatters and she's almost given up on finding her absentee father. She rents a room from an elderly woman she barely talks to.
I adored Emmie. She is such a bright spot in the novel. For everything she has been through and will go through, she has such a positive outlook on life and sees the best in people. And yet, when it comes to her own life, she does not always see what she has right in front of her. Besides Emmie, Louise, Emmie's landlady, was my most favorite character in the novel. She has been through a lot herself over the years.
Dear Emmie Blue is a novel of self-discovery, letting go and taking chances. It is full of heart, at times bittersweet, and, when I reached the end, I was reminded of why I love to read so much. 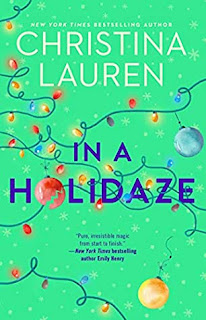 Call me a harlot. ~ Opening of In a Holidaze
In a Holidaze by Christina Lauren
Gallery Books, 2020
Romance; 288 pgs
Source: NetGalley for an honest review.
In a Holidaze was my first Christmas themed book of the year and it did not disappoint. Mostly. I was so excited to start this Groundhog Day like story about a young woman who relives the same holiday multiple times--stuck in some sort of time loop--until she gets it right. What exactly "it" is, she isn't sure at first.
Maelyn Jones has a job she barely tolerates and is back living at home to save on expenses. As they have for all the years past, Mae, her teen brother and her divorced parents join friends at a cabin for the holidays. That cabin in Utah is her favorite place in the world.
But after a late night romantic interlude that never should have happened and then receiving bad news the next morning, Mae worries all is lost. She makes a single wish just before everything goes dark. She wakes up on the airplane, sure she's been in a car accident, only to find herself back on the plane--not headed home, but headed to the cabin. As if the holiday had not yet happened. She soon discovers she is reliving the past, having been given a second (and more) chance.
I found In a Holidaze to be just as funny and romantic as I hoped. I loved Mae and I really enjoyed spending time at the cabin with her friends and family. Mae is a relatable character. I wasn't too sure about her love interest at first admittedly and doubted whether he was as into her as she was to him, but as the novel progressed, I began to see things a little differently. My only real complaint about the novel is that I felt the time loop premise was not used to its full advantage. Even so, I liked the way everything was wrapped up in the end. This was my first novel by the writing team that is Christina Lauren, and it will definitely not be my last.