My Bookish Mewsings: The Rules of Magic by Alice Hoffman

Once upon a time, before the whole world changed, it was possible to run away from home, disguise who you were, and fit into polite society. ~ Opening of The Rules of Magic 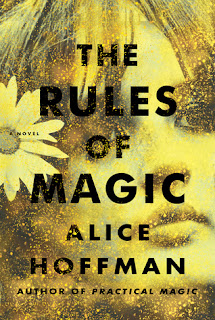 The Rules of Magic (Practical Magic Prequel) by Alice Hoffman
Simon and Schuster, 2017
Fiction/Fantasy; 369 pgs
It has been awhile since I read Practical Magic or seen the movie, and while it isn't my favorite Alice Hoffman book, I still really enjoyed it. Hoffman has a gift with words. I find her writing so beautiful: from the way she strings words together to the stories she tells. I have had The Rules of Magic on my shelf for a while now, a Christmas gift the year it came out. Thanks to those of you who voted in my September TBR List Poll, I finally made time to read it.
The Rules of Magic is the novel that tells the story of the great-aunts who raise Gillian and Sally from Practical Magic. Franny, Bridget (aka Jet), and their brother Vincent have been raised to be as normal as can be, only they have always known they are anything but. Franny has a gift with birds, Jet can read other people's minds, and Vincent, whose charm and very presence draw everyone to him. Their mother Susanna does her best to keep them reined in--she has strict rules, including some very odd ones:

No walking in the moonlight, no red shoes, no wearing black, no cats, no crows, no candles, no books about magic. And most importantly, never, ever, fall in love.

But the past cannot be locked away and forgotten so easily, as proves true for the Owens' siblings. When Franny is invited to her Aunt Isabelle's house in a small Massachusetts' town, her world is changed irrevocably as is the lives of her sister and brother who travel with her. The townsfolk are afraid of the Owens family, blaming them for everything that has gone wrong from past to present. Then there is the curse. Should an Owens love, the person they love will die.
The Rules of Magic takes us through the lives of Franny, Jet and Vincent as they struggle to figure out where they fit into the world, understand the Owens family and it's history, and what it all means. They come into their own and learn to love--even despite the curse--and how to let go. There is certainly magic in their lives--magic all around them--but as is often true with Alice Hoffman's novels, this novel is more about family and the relationships the characters forge with one another as they journey through their lives.
I cannot not pick a favorite among the characters storyline-wise--they each came alive as I read. There is Franny, often the responsible one as the oldest sibling, who afraid to give in to love and risk triggering the curse, denying herself that bit of happiness, but always keeping her family together; there is sensitive Jet whose gift for reading minds is sometimes more of a curse itself. She loves hard and suffers just as hard; and then there is Vincent, the youngest, who lives on the edge, taking risks, meddling in black magic, and searching for his own path. The secondary characters are just as well-developed, among them the loyal and steadfast Haylin, the Reverend whose heart, once so black in anger and guilt, begins to thaw, and William, who will stand by his man no matter what. There are others too, of course, from Rafael, Levi, cousin April, Isabelle, to Regina, all of whom are memorable and significant in their own ways.
The history of the times play a significant role in Hoffman's story as we see events from the 1960's and 1970's come into full play, shaping the characters lives. The reader also learns more about Maria Owens, the woman behind the curse, who suffered great loss centuries before. She is the subject of the most recent book in the series, Magic Lessons, which I look forward to reading.
The Rules of Magic hit all the right spots for me--characters who I came to really care about, a setting I could step right into, and beautiful writing. Full of heart and suffering, sad and yet hopeful, I thoroughly enjoyed this novel.