Bookish Thoughts: This Side of Murder by Anna Lee Huber

They say when you are about to die your entire life passes before your eyes in a flurry of poignant images, but all I could think of, rather absurdly, was that I should have worn the blue hat. ~ Opening of This Side of Murder 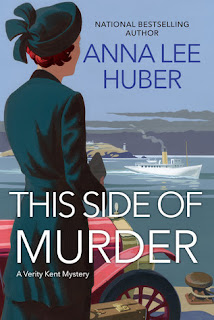 This Side of Murder is the first in a new series by author Anna Lee Huber, set in 1919 England. Verity Kent is a war widow, having lost her husband like so many other brides to the war. When she receives an invitation to the engagement party of one of her husband’s best friends, Verity respectfully declines. The last thing she wants is to be surrounded by sympathetic looks and condolences. A cryptic letter from an anonymous source, however, makes her change her mind. Could her husband have really been guilty of treason? Verity cannot let that go. She does not believe it and will not stop until she finds out who sent her the message and what it means.

Umbersea Island proved to be the perfect location for this mystery—isolated, beautiful, and with a storm brewing on the horizon soon to hit land. The first thing Verity notices upon her arrival and meeting of the other guests is just how odd the guest list is. Many of the men had served together during the war, each carrying their own share of dark memories. As Verity puts on her charm and uses the skills she picked up while in the secret service during the war, she soon learns that there is an especially dark secret someone wants to keep hidden. When the first body turns up, her suspicions are more than confirmed. She joins forces with another guest to uncover the truth, not quite trusting even him.

This Side of Murder is my first novel by Anna Lee Huber who is popular among my friends for her Darby mystery series. The author takes her time to set up the mystery, giving the reader the chance to get to know Verity a bit. I liked her instantly and had a good feeling about the novel from the start. I like my mystery heroine to have backbone, be resourceful, observant, and have a good head on her shoulder—and Verity had all of that and more. She has an interesting backstory that almost made me wonder if the author had written about her before (I don’t believe she has). It is something I hope the author will explore in later books in the series—female secret agents during the war are something that have long intrigued me.

The impact of war on the psyche is not something that can easily be dismissed. I like that Huber did not gloss over it in her novel. Each of her characters has been touched by the war in some way, often in different ways, and feel like genuine people. Verity herself has been affected by the war, not only in the role she played, but also in her love for a soldier and his ultimate death. Her grief is palpable. Even though 15 months have passed since she received that fateful telegram, we are reminded that the loss of a loved one isn’t something easily overcome—if at all.

The mystery itself was well played out. As Verity begins to fit the pieces to the puzzle laying before her together, the picture became clearer to me as well. There are a couple of big plot twists I did not see coming (is saying so a spoiler? Sorry if it is.), one of which I am still not sure about how I feel. Or maybe I do know, but I have mixed feelings. Tense, atmospheric, and very Christie-esque make a winning combination.

If Anna Lee Huber’s other books are as good as This Side of Murder, I have a lot to look forward to. Thank you to my husband for giving me this book for Christmas! 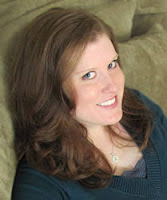