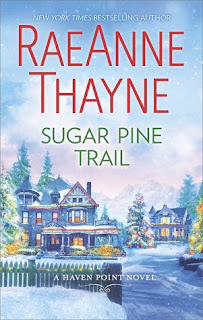 Opening of Sugar Pine Trail: This was going to be a disaster.

An only child to two older now deceased parents, librarian Julia Winston has always lead a quiet life. For a book club assignment, Julia jots down some ideas of experiences she would like to do--a bucket list of sorts. She doesn't take it very seriously, at least not until her long time crush rents the apartment above her. Jamie Caine is sexy as can be. He's a pilot for his family's company. He doesn't give much thought to his plain librarian landlord at first. But when she takes in two young boys whose mother has disappeared, he begins to see her in a different light. And then he accidentally stumbles on her list. He wants to fill her life with the same awe and joy he's felt since getting to know her. Only Jamie has his own demons from the past to ward off. He doesn't want to get involved in a serious relationship--and he knows Julia is the kind of woman who deserves no less.

I always enjoy my time in Haven Point and getting to know Julia and Jamie was no different. Julia is a bit reserved at first, and I admit it took me a little bit to warm up to her. I think it must be the same way Jamie saw her at first--but once I got a real look into who she was, I was pretty taken with her loving heart and generous spirit too. Jamie was pretty cool as well. He could have turned out to be one of those playboys that make me cringe in romance novels, but his own back story is pretty compelling. And those two boys . . . Talk about heartbreak! Their story is what really made this book for me. I cannot say this is my favorite of RaeAnne Thayne's novels, although I did enjoy it quite a bit. I adore the Caine family and wouldn't mind spending more Christmases with the family. 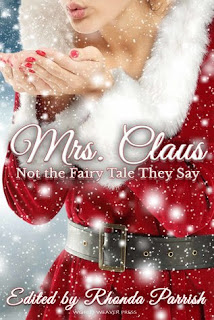 Opening of Mrs. Santa Claus: Not the Fairy Tale They Say: If you look up Santa Claus the top Google result is Wikipedia (because of course it is).

I could not pass up this anthology of short stories when I first came across it. Santa Claus is canon as is his wife, although she always gets the short straw when it comes to most stories about Christmas. In Mrs. Claus: Not the Fairy Tale They Say, readers are treated to fourteen stories featuring Mrs. Claus as you have never seen her before. As with any collection of short stories, some of the stories are stronger than others, but I enjoyed them all overall.

There were a few stories I wanted to like more--and I might have had there been just a bit more development. The one that immediately pops into my mind is Randi Perrin's "Moves Like Jagger", in which Mrs. Claus is a witch--and you know how I love stories about witches. I liked the world building and the hint of backstory provided, but, as I said, wish there had been more to flesh it all out for me. I had a similar feeling about "Good Morning" by Kristen Lee, which I was pulled into right away, but felt was too short.

"Miss 'Lil Toe Head" by Michael Leonberger was likely the most melancholy of the lot. I wasn't quite sure what to make of it, to be honest. Playing Mrs. Claus along with the woman she loves dressed as Santa Claus, the two make money during the holidays by acting like the jolly couple--hired by parents to be "caught" by children in their homes leaving behind presents. It takes a dark turn after that, with a few unexpected twists--medical experiments, a traumatic childhood, and a appearance by the real Miss Claus. Or one of them at least.

Among my favorites was "Wight Christmas" by Laura VanArendonk Baugh, her story featuring Mrs. Claus as a Valkyrie investigating the recent destruction of toys and the murder of elves. A mix of humor, well-imagined characters, and an intriguing premise, I was quite taken with this first story in the collection. It got the book off to a solid start. I also really enjoyed "Unexpected Guests" but Andrew Wilson, about a powerful fae version of Mrs. Claus and her human husband. While her husband is away, Elora discovers some unwelcome guests out to steal from her. I do love stories about the fae, and I liked the world building in this one quite a bit. Another really fun one, and perhaps my favorite of all of the stories was "Shouldering the Burden by M.L.D. Curelas, in which our heroine, Phaedra Claus, a bit of a pirate, returning a statue to her home in Greece.

There was a definite science fiction  and fantasy slant to several of the stories, from aliens to monster hunters, to stories with a more steampunk feel to them. Or even stories with a more traditional feel  despite Mrs. Claus being as nontraditional as they come. Mrs. Claus: Not the Fairy Tale They Say was the perfect way to finish up my holiday reading for the time being. A bit of romance, crime fighting, horror, comedy, action, and a whole lot of magic mixed in.