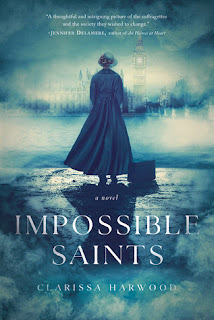 
Set in England in 1907, Impossible Saints is a novel that burns as brightly as the suffrage movement it depicts, with the emotional resonance of Tracy Chevalier and Jennifer Robson.

Escaping the constraints of life as a village schoolmistress, Lilia Brooke bursts into London and into Paul Harris’s orderly life, shattering his belief that women are gentle creatures who need protection. Lilia wants to change women’s lives by advocating for the vote, free unions, and contraception. Paul, an Anglican priest, has a big ambition of his own: to become the youngest dean of St. John’s Cathedral. Lilia doesn’t believe in God, but she’s attracted to Paul’s intellect, ethics, and dazzling smile.

As Lilia finds her calling in the militant Women’s Social and Political Union, Paul is increasingly driven to rise in the church. They can’t deny their attraction, but they know they don’t belong in each other’s worlds. Lilia would rather destroy property and serve time in prison than see her spirit destroyed and imprisoned by marriage to a clergyman, while Paul wants nothing more than to settle down and keep Lilia out of harm’s way. Paul and Lilia must reach their breaking points before they can decide whether their love is worth fighting for. [Goodreads Summary]


Why I want to read it: If the cover isn't enough to draw me to this book, the description seals the deal. Women's suffrage and a seemingly impossible romance. I hope this one turns out to be as good as it sounds! 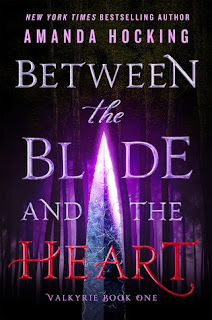 Between the Blade and the Heart by Amanda Hocking
Release Date: January 2, 2018 by St. Martin's Press/Wednesday Press


Valkyries have one great responsibility: to return immortals to the afterlife by slaying them. As a Valkyrie, Malin has always known that the balance of the world rests on her ability to carry out orders. But when Malin discovers that her mother spared the life of an immortal who was destined to die, her world is thrown into chaos.

Malin not only wrestles with the knowledge that her mother might not be who she thought—she’s also thrust into the path of a gorgeous blue eyed guy named Asher who needs her help slaying the rogue immortal who destroyed his family. The balance of the world is at stake. And, as Asher competes with Malin’s ex for her love and loyalty, so is her heart. [Goodreads Summary]


Why I want to read it: Valkyries! What more is there to say? 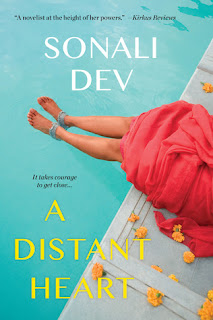 
Her name means “miracle” in Sanskrit, and to her parents, that’s exactly what Kimaya is. The first baby to survive after several miscarriages, Kimi grows up in a mansion at the top of Mumbai’s Pali Hill, surrounded by love and privilege. But at eleven years old, she develops a rare illness that requires her to be confined to a germ-free ivory tower in her home, with only the Arabian Sea churning outside her window for company. . . . Until one person dares venture into her world.

Tasked at fourteen-years-old with supporting his family, Rahul Savant shows up to wash Kimi’s windows, and an unlikely friendship develops across the plastic curtain of her isolation room. As years pass, Rahul becomes Kimi’s eyes to the outside world—and she becomes his inspiration to better himself by enrolling in the police force. But when a life-saving heart transplant offers the chance of a real future, both must face all that ties them together and keeps them apart.

As Kimi anticipates a new life, Rahul struggles with loving someone he may yet lose. And when his investigation into a black market organ ring run by a sociopathic gang lord exposes dangerous secrets that cut too close to home, only Rahul's deep, abiding connection with Kimi can keep her safe—and reveal the true meaning of courage, loss, and second chances.


Why I want to read it: I seem to be collecting Dev Sonali's books, but I have yet to read any of them. This upcoming release has reminded me I need to get to them!