She ran, weaving in and out of the startled pedestrians, but her pursuer was still close on her heels. ~ Opening of Radio Girls 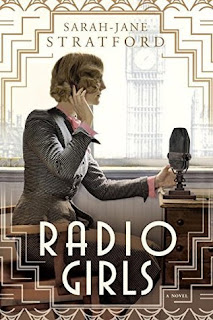 Radio Girls by Sarah-Jane Stratford
NAL, 2016
Fiction (Historical); 384 pgs
Source: I received this book from the Publisher via NetGalley for an honest review.

Radio Girls was such fun. I loved it. From a historical aspect alone, the novel ignited the researcher in me, making me want to learn more about the people I was reading about. Journalism has long been an interest of mine and reading about the early days of the BBC was intriguing. Newspapers were always the source of news for many people, but the radio took it to a different level, bringing voices into the homes of anyone who owned a radio in an instant. The main character, Maisie, may be fictional as is the espionage aspect of the novel, but quite a few characters throughout the novel are real historical figures--including Lady Astor and literary greats such as H.G. Wells and Virginia Woolf.

Maisie just needed a job. An American trying to make her way in London (anything to avoid returning to the U.S. and her actress mother), she needed the income. She leaves her interview with the BBC knowing she didn’t pass muster, but the next thing she knows, she is starting the next week as a secretary. Serving both the formidable Director-General, John Reith, and the Director of Talks, the extraordinary Hilda Matheson, Maisie has her work cut out for her.

With growing unrest in Europe and the collapse of the economy in the United States, there is a strong sense of worry in the air in terms of just how England will be impacted. No one wants to be drawn into a war, and men who lost a lot of money in U.S. investments are suddenly desperate.

Maisie has a good eye for detail and it is that, in part (and the encouragement of Nora), which motivates Maisie to unofficially start looking into possible espionage. What starts as innocent puzzle solving turns into a more dangerous game, one that could very well put Maisie’s life on the line. She is sure in her cause, however, and willing to take the chance.

I saw a lot of growth in Maisie’s character over the course of the novel. She’s rather unsure of herself in the beginning, but her confidence grows over time. Society was on the cusp of major changes as a whole, tradition versus progress, both vying for position. We see that clearly with Maisie’s character who, in the beginning, aspires to a job which will lead to marriage to a man who will be able to take care of her. Certainly the influence of women like Nora play a part in Maisie’s change in attitude as time goes by. She realizes just what she is capable of and that she does have other opportunities open to her. As a result, a new found confidence takes her far.

There are still hurdles to overcome obviously. Women are only just getting the right to vote, and there are many who are skeptical of whether that is a good thing. Even at the BBC where women sometimes held powerful positions, they were still expected to quit once married and pregnant with child. Tradition has strong roots and change does not generally come easy, especially because it involves long held beliefs and practices. At that time in history, society wasn’t ready to accept same sex relationships, which were not only considered immoral, but also criminal. I wondered how Maisie would react to Nora’s secret once she discovered it, and appreciated how the author dealt with it. It is clear throughout that Maisie has a lot of respect for Nora, and admires her. I felt the same way. I loved Nora and have a lot of admiration for all she accomplished not only in the book, but especially in real life.

The mystery aspect of the novel may have stretched believably, but I wasn't bothered by that as I was reading. I found myself holding my breath a few times at the close calls and eager to see how everything would play out. I was caught up in the lives of the characters and the historical time period. I thoroughly enjoyed Radio Girls, and look forward to reading more by Sarah-Jane Stratford.