Bookish Thoughts: Death Sits Down for Dinner by Tessa Arlen

A wet and miserable late-autumn day had turned into a bitterly cold winter night as the sun sank unseen below a horizon obscured by a bank of thick gray clouds. ~ Opening of Death Sits Down for Dinner 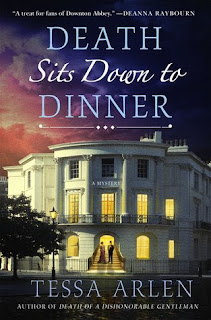 Tessa Arlen's series is fast becoming my favorite cozy mystery series. From the Edwardian English setting to the proper Mrs. Jackson and the ever persistent Lady Montfort, I adored the author's earlier book, and this second one was quite a delight to read too. The previous book was set in the countryside while this one was placed in London. It opens with Lady Montfort preparing to attend a birthday party for the well known Winston Churchill hosted by a close friend and patroness of one of England's largest charities. The evening does not go quite as planned when Lady Montfort stumbles on a body, a knife the obvious murder weapon.

Churchill assures everyone the best of the authorities is on the case, but Lady Montfort, despite being told to stay out of it, cannot help but insert herself into the investigation. She knows there are things her friends, London society and the servents will not share with the police even in the face of murder.

Mrs. Jackson is anything but thrilled to be pulled into another murder investigation. She would much rather keep to her housekeeping duties, and when asked to help plan a big charity event in London, she is insistent that is all she will do. Soon, however, she is lured into the investigation too. What they find are secrets upon secrets. Time is short and the body count is on the rise. The two women must work quickly to find answers and stop a killer from taking another life.

Author Tessa Arlen vividly captures the world of London's high society as well as the politics of the time. The differences between the society class and the working class were stark during that time, which is why Mrs. Jackson's role in helping with the investigation always proves to be so invaluable. And yet cultural change is definitely in the air, even if in the slightest of ways. It is an exciting time in England's history.

I could have taken issue with two amateur detectives actively investigating a murder that they really had no reason to get involved in, but I so enjoy seeing Lady Montfort and Mrs. Jackson in action. There is one scene in the novel in which Lady Montfort's son calls his mother out on her involvement, which I thought was well placed. Even though her son's and her perspectives may be different about why she's decided to conduct her own investigation, I appreciated the author acknowledging how it might look to any observer (reader included) in such a natural way.

As always, I enjoyed spending time with the ever sturdy and reliant Mrs. Jackson as well as the too-curious-for-her-own-good Lady Monfort. Both are rather traditional in their thinking, and while reluctant to step outside their comfort zones, they both recognize that their ways might not be the only or even the best way. I like seeing growth in characters, and both of these women demonstrate insight and intelligence throughout the novel.

Death Sits Down For Dinner is a wonderful follow-up to Death of a Dishonorable Gentleman, one I enjoyed quite a bit. The mystery itself was intriguing at every turn. I look forward to reading more in this series and seeing what else Tessa Arlen comes up with.

For more information please visit Tessa Arlen’s website. Read Tessa Arlen’s blog at Redoubtable Edwardians. You can also connect with her on Facebook, Twitter, and Goodreads.
© 2016, Wendy Runyon of Musings of a Bookish Kitty. All Rights Reserved. If you're reading this on a site other than Musings of a Bookish Kitty or Wendy's feed, be aware that this post has been stolen and is used without permission.
Posted by Literary Feline at 5/18/2016 11:00:00 PM