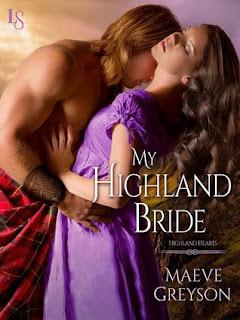 Kenna Sinclair knew her time would come to jump back into time to the thirteenth century Scotland where she would join her eldest sister and grandmother, only she didn't know it would be so soon. She isn't exactly happy to be leaving behind the modern conveniences she's grown used to.  Still, fate is fate and her grandmother says it must be so--and so it will be.  The last thing she expects though is to find herself attracted to the clan's man-at-arms who clearly has had his way with many women. Colum Garrison is just as taken with her, of course, and in his heart, knows no other woman will do ever again.

This is the second book in the Highland Hearts series, but my first book by the author. It reads quite well as a stand alone, although I always think with books like this I wish I had read the first to get more of a background, especially when it involves paranormal powers. The author offers some idea in this installment so I wasn't feeling completely lost.  It seems the Sinclair women all have some sort of special ability beyond just the ability to time walk, and for Kenna that means she can read minds--and sometimes manipulate thoughts.  Surprisingly, she does very little of that in the novel.

I admit to being a bit bored with the first quarter of the book. Colum and Kenna meet, fall in love and know they are meant to be together--it's fate, after all. Kenna wants the big gorgeous oaf to propose to her, but he's decided he can't. At least not until he can offer her a proper home. You have to respect a guy who wants to do it right. Only, a new suitor visits the castle, and he will not take no for an answer. Then, things pick up.  Thank goodness because it seemed like everything was a little too easy for the hero and heroine.

I liked Kenna quite a bit. She's an independent thinker, knows what she wants, and isn't afraid to go after it--or him. Colum seems like a really nice guy--strong and fierce in a fight, and loyal.

After reading My Highland Bride, I cannot say I am especially interested in going back and reading the first in the series.  However, knowing what and who will be in the third book . . . Well, that's a different story. The character that most interested me in this novel will be appearing in that one--and I may have to see how that works out.


You can learn more about Maeve Greyson and her books on the author's website. 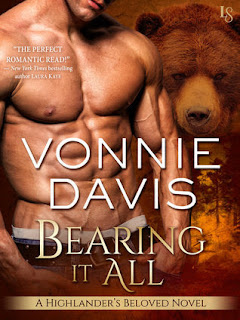 Bearing It All (A Higlander's Beloved #3)  by Vonnie Davis
Loveswept, 2015
Romance (Historical/Paranormal); 297 pgs

First Sentence: To Ronan Matheson, this was home.

I found the first two books in the the series entertaining, and so was eager to give Bearing It All a try, a novel featuring the middle of the Matheson brothers. Ronan is the most reserved of the brothers, having never quite gotten over his father's death. Like his brothers, he is a Highlander through and through--as well as a bear shifter. One day while in bear form, Ronan was swept off his feet by a French Intelligence officer when she falls from the sky right on top of him. I am not sure who was more surprised.  As the weather takes a turn for the worst, the two are snowed in at Ronan's cabin getaway and the two have no choice but to get acquainted.  Ronan tries to hide his inner bear--a bear that has other ideas.

I wasn't as enamored with this particular installment in the series. Anisa, the heroine, certainly is no damsel in distress even despite her situation. She's been accused of terrorism and wants only to clear her name. She never expected to fall in love with a hunk of a Scot and his needy bear.

I'm finding it hard to explain what bothered me about this book other than to say I felt something was missing. Perhaps it was the fact I had a hard time suspending my disbelief.

[Although I will not give any major plot points away, some of you may find what I write next too much of a spoiler.  Read at your own risk.]

I had a hard time believing the two did not recognize each other after only a few years apart, especially given how Ronan believed he was in love with her when they first met in France. If they'd been children back then maybe, but as adults?  People don't change that dramatically over a five or six year span of time. At least I can't imagine that happening to these two. I didn't quite buy into how quickly the two fell in love--lust, yes, but not love. Especially not with their backgrounds and baggage. I also had a hard time with how easy the novel came to a resolution, especially given the allegations against Anisa. That whole story line was a little hard to believe, really, but I gave it the benefit of the doubt given the type of book this is. It is a fantasy novel after all.

All of this bothered me. I don't know if it was timing (I was coming off reading a book I really liked when I read this one) or just not the right book for me in general.

What did I enjoy about this book? The flirty and easy banter between the two characters, Ronan and Anisa. Seeing Effie in her pink baffies again (She's always a joy to run into in books--whether she's pulling a dildo out of her purse or using a healing spell) and revisiting some of the characters from the other books was definitely a highlight. I thought Ronan was a great character, and I found the relationship between him and his bear an interesting one. Ronan is very protective of those he loves and very tough, but there is a definite vulnerability there. I think it came out more in Ronan's other half--the bear, something you wouldn't really expect, At least I didn't.

While I found this book to be disappointing in comparison to the previous books in the series, it did have its moments. If you are interested in reading this series, definitely start with the earlier books.


You can learn more about Vonnie Davis and her books on the author's website.