I believe just about anyone can kill in the right circumstances, given enough motivation. 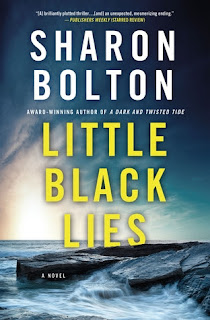 In such a small community as the Falkland Islands, a missing child is unheard of. In such a dangerous landscape it can only be a terrible tragedy, surely...

When another child goes missing, and then a third, it’s no longer possible to believe that their deaths were accidental, and the villagers must admit that there is a murderer among them. Even Catrin Quinn, a damaged woman living a reclusive life after the accidental deaths of her own two sons a few years ago, gets involved in the searches and the speculation.

And suddenly, in this wild and beautiful place that generations have called home, no one feels safe and the hysteria begins to rise.


If you hang around book blog sites frequently, you may have come across mention of Sharon Bolton's Little Black Lies once or twice. Or maybe a lot. I know I have. After hearing nothing but good things about all of Bolton's books, I thought Little Black Lies might be a good place to start, given it's a stand alone novel. Now I know what all the fuss is about--and I have to agree.

Little Black Lies is everything I love in a crime fiction novel.  It is intense and thought provoking with fully fleshed out characters, a complex plot, and a setting that itself could be its own character. The story is told from three different perspectives, that of Catrin, a grieving mother who has nothing left to live for; Callum, a former soldier suffering from Post Traumatic Stress Disorder who will do anything for the woman he loves; and Rachel, a woman being eaten by guilt and depression. Each of the characters have connected and complicated histories.

With the disappearance of three children from the Falkland Islands, the most recent from a tourist family, suspicions and fears are running high among the locals and those from out of town. Sharon Bolton captures the essence of both the individual panic and that of group think, which in and of itself can lead to terrible repercussions.

There is so much to this novel. I felt transported to the islands as I read the novel, caught up in the beauty and cruelty of the land and sea, the history of the people, and wrapped up in the individual stories of the characters. Catrin is a difficult character to get to know at first; she is distant and may seem a bit uncaring--but the more I learned about her, the more I came to care about her. She has suffered so much; my heart ached for her. I liked Callum quite a bit from the start. The more I learned of his story, the more I liked him. He hasn't had an easy time of it either, suffering from his own demons.  Rachel was the hardest for me to warm to, I confess. I am not sure I ever completely did. There was a part of me that could identify with some of what she was going through. Perhaps some of that was in the way Bolton told the story; perhaps that was the intent. Or perhaps it was just me and which characters I found it easiest to identify with.

I hesitate to go into too much detail about the plot and the character's lives. I think my not knowing is part of what made this book even more powerful than it might have been otherwise. Although, I think I still would have loved it.  It touches on several issues I hate to read in books. I admit there is one scene that had me so disturbed I had to set the book aside for awhile. I still couldn't stop thinking about that scene. I found it so heartbreaking, even if necessary.

Little Black Lies is so full of twists and turns--and all so well done! This was a near impossible book to put down. Sharon Bolton knows how to build up the suspense and keep the reader guessing. I loved the ending and how everything played out.

I have no doubt I will be reading more by Sharon Bolton in the near future. If all her books are like this, she is sure to be a new favorite.

To learn more about Sharon Bolton and her books, please visit the author's website and Goodreads.

Source: I received this book for an honest review from the publisher via NetGalley.