The seventh of July was a magnificent summer's day, one of those majestic Atlantic days that always lifted Commissaire's Dupin's spirits. ~ Opening of Death In Brittany 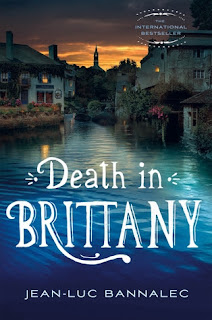 This is the first book in a crime fiction series featuring Commissaire Dupin. The series was originally written in German. This is very much a traditional police procedural with the focus on the plot and crime. Commissaire Dupin is good at his job, but not always easy to work with. He tends to keep all his cards close to his vest, not even letting his investigative team know what he's thinking. He is not a fan of politicians and they clearly are not fond of him.

When an elderly hotel owner is brutally murdered in his own hotel, Commissaire Georges Dupin is tasked with solving the crime. Could it have been the victim's own family, an employee at the hotel, the wealthy art historian, or the victim's best friend? Everyone seems to be hiding something, Dupin is sure. The investigation heats up when a window is broken at the crime scene--vandalism or a break-in? And then another body is found. The Commissaire has his work cut out for him, unraveling the threads that will lead him to the killer and the reason behind the murder. With the summer tourist season just about to begin, even the politicians are looking for quick answers. Dupin will have to come up with the answers fast.

What I enjoyed most about this book was the idyllic setting. The author has a way with putting the reader right into the small community on the coast of France he writes about. It sounds like somewhere I would not mind visiting. I got a good sense of how tight the community was, everyone knowing everyone's business, and of the history and culture of the area.

Commissaire Dupin is an interesting character, stereotypical in some ways, but I especially loved the little details the author added to make him his own person. He loves coffee (what a relief he isn't a drunk!) and food. I do wish he had been more forthcoming with his investigative team. I can appreciate someone preferring to work alone (I tend to be like that too), but it could have put him in a dangerous spot, not to mention left his team in a bind if something had happened to him. I am overthinking it though. Ultimately, I really did like Dupin and his quirks. I often was glad to wander off with him, lost in thought, to look out over the water and put the details of the mystery together. There were several hints of an interesting backstory that I would love to see explored further.

As this is a first book in a series, I can only hope that future books will more fully flesh out some of the minor but significant characters, particularly those on Dupin's investigative team. My only real complaint about the novel was that they were not more developed, particularly Le Ber and Labat and even Nolwenn.

Overall, I enjoyed reading Death in Brittany. If you enjoy reading about France and enjoy a plot-driven police procedural, you should definitely give this book a try.


Source: I received this book from the publisher via NetGalley for an honest review.
© 2015, Wendy Runyon of Musings of a Bookish Kitty. All Rights Reserved. If you're reading this on a site other than Musings of a Bookish Kitty or Wendy's feed, be aware that this post has been stolen and is used without permission.
Posted by Literary Feline at 10/06/2015 09:00:00 PM