Kenzie Denune pedaled the bicycle harder, her thighs burning from the exertion. ~ Opening of A Highlander's Passion 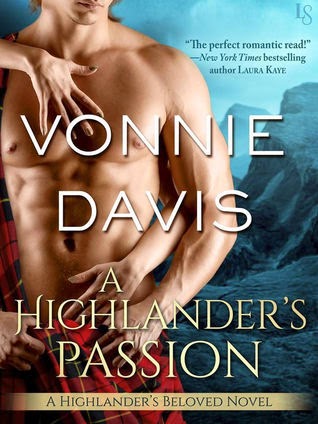 Bryce is a bear-shifter like his brothers. He is also the father to an adorable little girl who desperately wants a new mother.  And not just any new mother.  She wants Kenzie Denune to be her mother. It isn't such a giant leap really. Kenzie and Bryce had been best friends growing up and they became lovers after the death of Bryce's wife. Kenzie has loved Bryce since they were children, and when he spurned her first for his wife and then again because he couldn't let go of his dead wife's memory, she swore she would never give him another chance.

Kenzie has only just lost her husband, a loss she is more grateful for than not. Her husband was a terrible man, beating her throughout the course of their marriage. Bryce blames himself, believing that if he'd not been too afraid to commit to Kenzie, she would not have found solace in another man's arms, especially one that mistreated her.  He has his work cut out for him if he wants to win her back.  He knows now she is the love of his life.

Kenzie learns early on in A Higlander's Passion more about her abilities as a witch, powers that came into being the last time her husband beat her. She blames herself for his death, believing a muttered curse was the cause.  Effie, an elderly American, who had inherited the Scottish manor she now lives in, takes Kenzie under her wing, revealing she, too, is a witch, the head of the coven, in fact, a coven assigned to protect the weak and innocent.

Kenzie's world--and life--are threatened when an evil bigger than any she has ever known seeks her out to use her for his own gain.  Bryce is determined to protect her at all costs just as she is determined to live.  Everything she has known or thought she knew about who she is becomes a question mark the more she learns.

Vonnie Davis continues to write with humor and wit in this second installment in this series, although this book comes with some very heavy issues. The author does not gloss over the subject of domestic violence and the grief that comes with a miscarriage.   There are two scenes in particular that stood out for me above all the rest in the book--the scene at the lake with the white roses and then a scene shortly after Kenzie lashes out at Bryce physically.  The author handled both of those scenes was with compassion and thoughtfulness.

A Highlander's Passion was quite an entertaining read, exciting and action-packed. I admit Bryce had to win me over along with Kenzie given his past behavior, but it was clear he was devoted to her.  I am eager to read the next book in the series and find out more about the middle brother.  And perhaps spend more time with Effie, who continues to be a favorite character of mine.

Source: I received an e-copy of this book from the publisher via NetGalley for an honest review.
© 2015, Wendy Runyon of Musings of a Bookish Kitty. All Rights Reserved. If you're reading this on a site other than Musings of a Bookish Kitty or Wendy's feed, be aware that this post has been stolen and is used without permission.
Posted by Literary Feline at 4/08/2015 09:00:00 PM