She sat at the piano, fingers still poised over the now-silent keys. ~ Opening of Miramont's Ghost 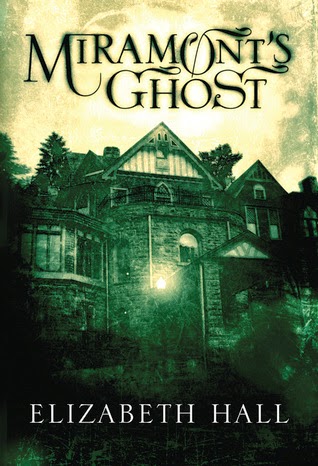 Miramont Castle, built in 1897 and mysteriously abandoned three years later, is home to many secrets. Only one person knows the truth: Adrienne Beauvier, granddaughter of the Comte de Challembelles and cousin to the man who built the castle. Clairvoyant from the time she could talk, Adrienne's visions show her the secrets of those around her. When her visions begin to reveal dark mysteries of her own aristocratic French family, Adrienne is confronted by her formidable Aunt Marie, who is determined to keep the young woman silent at any cost. Marie wrenches Adrienne from her home in France and takes her to America, to Miramont Castle, where she keeps the girl isolated and imprisoned. Surrounded by eerie premonitions, Adrienne is locked in a life-or-death struggle to learn the truth and escape her torment. Reminiscent of Daphne du Maurier's Rebecca, this hauntingly atmospheric tale is inspired by historical research into the real-life Miramont Castle in Manitou Springs, Colorado.

The prologue opens with our dear Adrienne looking back in time, remembering her life, how happy she once was and then at the terrible turn her life took. It is a strong opening, one that drew me in immediately. Next the reader is running in the fields in France with a young Adrienne who is happy and carefree.  Life was indeed good for the young girl at that time. Her grandfather was her world and his love made everything all right. At four, Adrienne did not understand the fear her clairvoyance struck in others. She did not fully understand what her visions were or what they meant. It was a gift she inherited from her grandmother, or was it really more of a curse?

I hesitated in including the book blurb for a couple of reasons. The main one being that a good portion of it does not take place until the last third of the book. Much of the book is of Adrienne's life in France, in the mansion she was raised in. The reader sees her grow up and how she changes as she learns the dangers of her visions, warned by her grandfather to keep them to herself. There's a subtle building of tension  with each turn of the page between Adrienne and her Aunt Marie who clearly sees Adrienne as a threat. Adrienne is not sure why--not until much later.

Adrienne had so little guidance as a child in terms of her visions. She had a supportive nanny who listened to her, but really didn't understand herself.  Adrienne's grandfather tried to protect her by not talking directly to her about the risks of talking about her visions. Adrienne's mother was too lost in her own drama--and a little afraid of her daughter--that she was not really much in the way of a mother to Adrienne at all. It was hard not to like Adrienne, in all her innocence and with her kind heart.

When the events unfold with her aunt and cousin in the later half of the book, as we learn their secrets and truths that had been buried, the novel takes a very dark turn. The reader and Adrienne are taken to Miramont Castle in Manitou Springs, Colorado, a beautiful place, much like the part of France in which Adrienne grew up. Adrienne's cousin is a Catholic Priest there, having before served in Santa Fe among Native Americans who were less than thrilled with the Church's encroachment on their lives and beliefs.

I especially enjoyed the historical aspects of the novel, from the conversations between the characters about life in America to the history of Miramont Castle and its occupants. Aunt Marie and her son see the world through late 1890's European eyes, a time when Native Americans were viewed by many as "savages" and efforts were being made to "civilize" them. Every time Aunt Marie would open her mouth just about, I would cringe. She was a rather despicable woman.  Even taking in her past, I never grew to like her or even sympathize with her.  The story of Miramont Castle is both a sad and dark one. Elizabeth Hall weaves fiction with that history in such a way you believe it could have perhaps happened that way. I won't say more for fear of spoiling the story.  I was also very curious about that time period in France, the role women played in society and the social and economic issues of the day.

I have not read Daphne du Maurier's Rebecca and so cannot speak as to any comparison. I do know I want to read Rebecca even more now. I love a Gothic novel. Admittedly, I was not as enamored by Miramont's Ghost as I hoped to be. It is hard to put my finger on exactly why. I wanted more. More character depth, more build up earlier on in the book in terms of tension and what was to come. Subtle is necessary in books like this, but I felt there was too much subtlety. It made what came later, some aspects of the story at least, seem too abrupt.

While I did not fall in love with Elizabeth Hall's Miramont's Ghost the way I hoped I would, I did enjoy reading the novel overall. I was intrigued by Adrienne's plight and frightened for her at the same time. Miramont's Ghost is a compelling read, both disturbing and rich in history, and definitely thought provoking.

I hope you will check out what others had to say about Miramont's Ghost on the TLC Book Tours route!