The viewing of the body has started. ~ Opening Sentence of Losing Touch 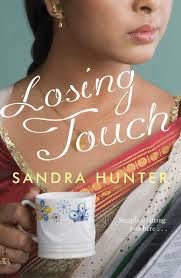 After Indian Independence Arjun brings his family to London, but hopes of a better life rapidly dissipate. His wife Sunila spends all day longing for a nice tea service, his son suddenly hates anything Indian, and his daughter, well, that’s a whole other problem. As he struggles to enforce the values he grew up with, his family eagerly embraces the new. But when Arjun’s right leg suddenly fails him, his sense of imbalance is more than external. Diagnosed with muscular dystrophy, he is forced to question his youthful impatience and careless cruelty to his family, until he learns, ultimately, to love them despite — or because of — their flaws. In a series of tender and touching glimpses into the shared life of a married couple, Sandra Hunter creates strikingly sympathetic characters — ones that remind us of our own shortfalls, successes, hypocrisies, and humanity.

My father worked hard his entire life.  He took his first paying job at age eleven to help out his family.  He had a difficult childhood in many respects.  His father worked long hours and he became the father figure in his sibling's lives.  He served in the military, fought in a war, married and started a family.  He wanted the best for his family and was disappointed when his efforts, in his mind, fell short.  He felt as if nothing he could do would ever be good enough in his family's eyes--in his own eyes.

In this way, Arjun reminded me of my father.  There was an awkwardness to his character; Arjun was unsure of himself and yet strove hard not to show it on the outside.  He could be controlling at times (isn't that what he was supposed to do as a father, as the head of the household, after all?), he said hurtful things and resorted to violence (especially when he was hurting), and did not understand his wife and children. He did not know how to connect with them, and yet he longed to be able to.  His illness was something he did not want to acknowledge or let define him.  In a way, his feelings toward his disease mirrored the relationships in his life.  That awkwardness again.  The disconnect.

Sunila, in her own way, was struggling too.   Whereas her husband wanted to maintain their cultural identity while setting up a home in another country, she wanted to embrace her new life and fit in.  She also suffered from a similar disconnect from her husband as he did from her.  She longed for a better relationship with him, but at the same time wasn't sure she liked the man she called her husband.

Their two children were raised in an entirely different environment than the one Arjun and Sunila came from. They are very much of two cultures, and adapted in their own ways.  It was sometimes a bone of contention between the father and his children.  Sunila often acted as the mediator between the children and their father.

The first part of the novel is set in the 1960's through the 1970's with each chapter divided by years, sometimes skipping a year or two or three and other times staying in the same year.  It is an interesting way to tell a story and you might think confusing, but Sandra Hunter makes it work and work well.  The reader still gets a good idea of who the characters are and what they are going through.  The chapters vary in focus between Arjun and his wife Sunila, with Arjun being the main focus.

The second part of the novel takes the reader into the twenty first century, as an aging Arjun and Sunila are doing the best they can, despite Arjun's poor health.  The children have both flown the coop, so to speak, and are leading their own lives.  The reader gets to see an even more vulnerable side of Arjun at this point, and it is both heartwarming and heartbreaking.

At the end of the novel, I cried not only for the characters, but for my dad and me, for those lost opportunities, and for my daughter, who will never know her grandfather but through my memories.

Sandra Hunter has written a poignant but quiet novel that touches on life's disappointments and regrets, about generational gaps, and the complexity of the human condition.  The writing is beautiful; the characters are realistic and their plight is one I think many will be able to relate to.

To learn more about Sandra Hunter and her book, please visit the author's website.

I hope you will check out what others had to say about Losing Touch on the TLC Book Tours route!

Many thanks to the TLC Book Tours for the opportunity to be a part of this book tour. The publisher provided an copy of the book for review.