I was already wide-awake when they came for me. ~ Opening from The Curiosity 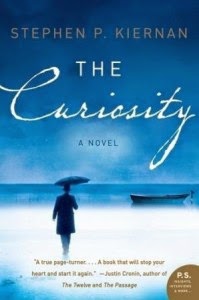 Dr. Kate Philo and her scientific exploration team make a breathtaking discovery in the Arctic: the body of a man buried deep in the ice. As a scientist in a groundbreaking project run by the egocentric and paranoid Erastus Carthage, Kate has brought small creatures-plankton, krill, shrimp-"back to life." Never have the team's methods been attempted on a large life form.

Heedless of the consequences, Carthage orders that the frozen man be brought back to the lab in Boston, and reanimated. As the man begins to regain his memories, the team learns that he was-is-a judge, Jeremiah Rice, and the last thing he remembers is falling overboard into the Arctic Ocean in 1906. When news of the Lazarus Project and Jeremiah Rice breaks, it ignites a media firestorm and massive protests by religious fundamentalists.

Thrown together by circumstances beyond their control, Kate and Jeremiah grow closer. But the clock is ticking and Jeremiah's new life is slipping away. With Carthage planning to exploit Jeremiah while he can, Kate must decide how far she is willing to go to protect the man she has come to love.

Imagine if there really was a way to bring a living being back to life after it had been frozen.  There are those today who believe it is possible.  In Stephen P. Kiernan's novel, The Curiosity, he takes the idea of cryogenics and brings a human back to life, a human that had been frozen in a block of ice for over a hundred years.  The author raises food for thought about ethics and morality, faith, our media culture as well as exploitation.  This is also a novel about love and finding one's path.

The novel is narrated by four different characters, including Dr. Kate Philo who first discovered the frozen man, reporter Dixon, the leader of the Lazarus Project and rather egocentric Erastus Carthage, and Jeremiah Rice, the reanimated man and judge from the early 1900's.  The fact that Carthage's section of the novel was written in second person seemed quite fitting given his personality.  It was a nice touch on the author's part, although it did take me a moment to get used to.

I do wish Carthage and Dixon had been more filled out as characters, although the reader is given an idea of what motivates them to some degree.  Dixon more than Carthage.  Carthage's character never grew on me, and I suppose he wasn't supposed to.  He was a purely selfish man who lost sight of the science and was more interested in the attention, power and riches.

Jeremiah and Kate were the most developed characters, and I liked both.  I appreciated Kate's dedication to her work and to Jeremiah.  And Jeremiah . . . I can see the draw to him, why the people he came into contact with liked him so much.  He was charming and kind.  He had an old worldliness to him, which given the time period he came from, it's no wonder.  Admittedly, sometimes he seemed too good to be true, but that never got in the way of my enjoying the book.  I loved his reaction to technology and the progress he saw all around him.  It's easy to take it all for granted given we live in a time when passenger airplanes and cars are common place.  Jeremiah's sense of awe and finding beauty in all that was around him even despite the violence he learned about was, in a way, inspiring.

I liked the way the author approached the ethical issues involved in science in research as well as the moral issues raised by the media, protesters and scientists themselves.  Kiernan did not shy away from showing humanity in a realistic way, including how we treat those in the spotlight given our media driven culture.  I hated to see how objectified Jeremiah was in the eyes of those around him.  The fact that he was a feeling and reasoning being was ignored by some, the progress of science being more important to them.

The relationship that grows between Jeremiah and Kate takes its time to unfold.  If you are expecting lots of romance and steamy sex, you won't find it here.  The book is better for it.  Both of the characters grow as people in part because of their relationship with each other--their friendship and growing love.

My only fault with the book is that I never really felt fully a part story.  I felt like an outsider looking in. At times it seemed more academic than anything else.  And maybe that's the way it was supposed to be, given the scope of the novel.

Overall, I enjoyed The Curiosity and being able to get to know Jeremiah and Kate.  I can see this book being a good one for a book club discussion.

To learn more about Stephen P. Kiernan, and his books, please visit the author's website and Facebook page.

I hope you will check out what others had to say about The Curiosity on the TLC Book Tours route!

Many thanks to the TLC Book Tours for the opportunity to be a part of this book tour. Print copy of The Curiosity provided by publisher.  I bought an e-copy to read, however, for sake of convenience.
© 2014, Wendy Runyon of Musings of a Bookish Kitty. All Rights Reserved. If you're reading this on a site other than Musings of a Bookish Kitty or Wendy's feed, be aware that this post has been stolen and is used without permission.
Posted by Literary Feline at 7/16/2014 12:00:00 AM