I went on a brief Michael Robotham reading spree last month, and was quite taken with his books.  I had not realized the books were part of a series, featuring two of the same characters. One of the things I particularly liked about the three books I read by Robotham was how different each was from one another, including being written from different perspectives.  Each can be read as a stand alone.  I was especially drawn to these books because they are set in London, England, one of my favorite crime fiction settings.

You can learn more about Michael Robotham and his books on the author's website.

Some days are diamonds. ~ Opening of Bombproof

Bombproof was my first Michael Robotham novel, and it was quite an intense ride.  Sam MacBeth has recently been released from serving time in prison for a crime he did not commit.  Only, the bad guys don't know that.  They think he's something he's not.  As a result, he gets mixed up in a plot that can only lead to more trouble.  On the run from the police who think he is a terrorist after the train he was on blew up, Sami must find a way to clear his name.  Unbeknownst to him, he has a little help on his side.  Retired police detective Vincent Ruiz is also on the case.

Bombproof is on the violent side.  The author pulls no punches.  It is dark and at times quite crazy.  Yet, there is also a bit of humor mixed in, which takes some of the edge off.  Sami is one of those guys you can't help but feel sorry for and want him to come out on top. 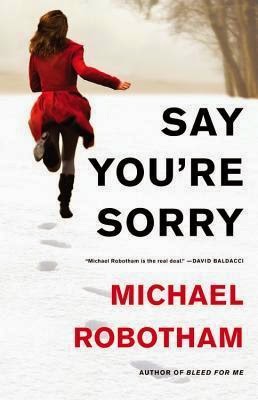 My name is Piper Hadley and I went missing on the last Saturday of the summer holidays three years ago. ~ opening sentence of Say You're Sorry

Say You're Sorry is the harrowing story about two missing girls, one of whom turns up dead after three years.  A couple is also found murdered in their own home.  Police have a suspect in custody, but clinical psychologist Joe O'Loughlin, who has been asked to question the boy, is pretty sure the young man is innocent.  Joined by ex-police detective Vincent Ruiz, Joe sets out to find out who the real killer is and to try and find the other missing girl before it is too late.

In this particular novel, the reader gets a more intimate glimpse into Joe's life and why his marriage fell apart. The mystery into the girls' disappearance is quite disturbing, particularly in how they were being forced to live.  It brings to mind Ariel Castro in Ohio and the girls he help prisoner for all those years.

Say You're Sorry was just as good as the other two novels and kept me guessing until the end.  There were quite a few times throughout the novel in which I had to hold my breath. 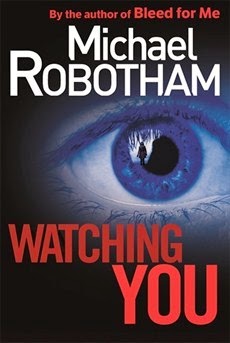 I fell in love and followed her, that's all you need to know. ~ opening of Watching You

I probably should have read Watching You after I read Say You're Sorry, but I did not pay close enough attention to publication dates.  While both books stand alone, an event in Say You're Sorry, is mentioned in Watching You--so you might want to read them the other way around if back story is important to you.

In Watching You, Marnie Logan finds herself at the center of a lot of death.  All evidence points to her when her bodyguard ends up dead.  Her husband has been missing for more than a year and, the deeper the authorities dig, the more skeletons they dig up from Marnie's past.  Only, Marnie swears she is innocent. Her psychologist, Joe O'Loughlin, is sure she is innocent and begins his own search into her past.  He enlists the help of his friend, retired police detective Vincent Ruiz.

I was thrilled to see Vincent Ruiz again because I liked his character in Bombproof quite a bit.  He isn't afraid to kick in doors and throw a few punches to get the answers he wants, but he also has a soft side to him.  He is ever the skeptic and and is loyal to the truth.  Joe O'Loughlin didn't make it into Bombproof although his name is mentioned.  He is very good at solving crimes, even though he's sworn that part of his life off.  Vincent and Joe reminded me a little of Jonathan Kellerman's Alex Delaware and Milo Sturgis, whose books I once read like there was no tomorrow.

Watching You was another intense read, full of twists, both the expected and unexpected.  Michael Robotham does a good job in this book of making the reader suspect just about everyone under the sun as being the culprit behind the murders, including the Marnie herself.  I love it when a book can keep me guessing until the end.